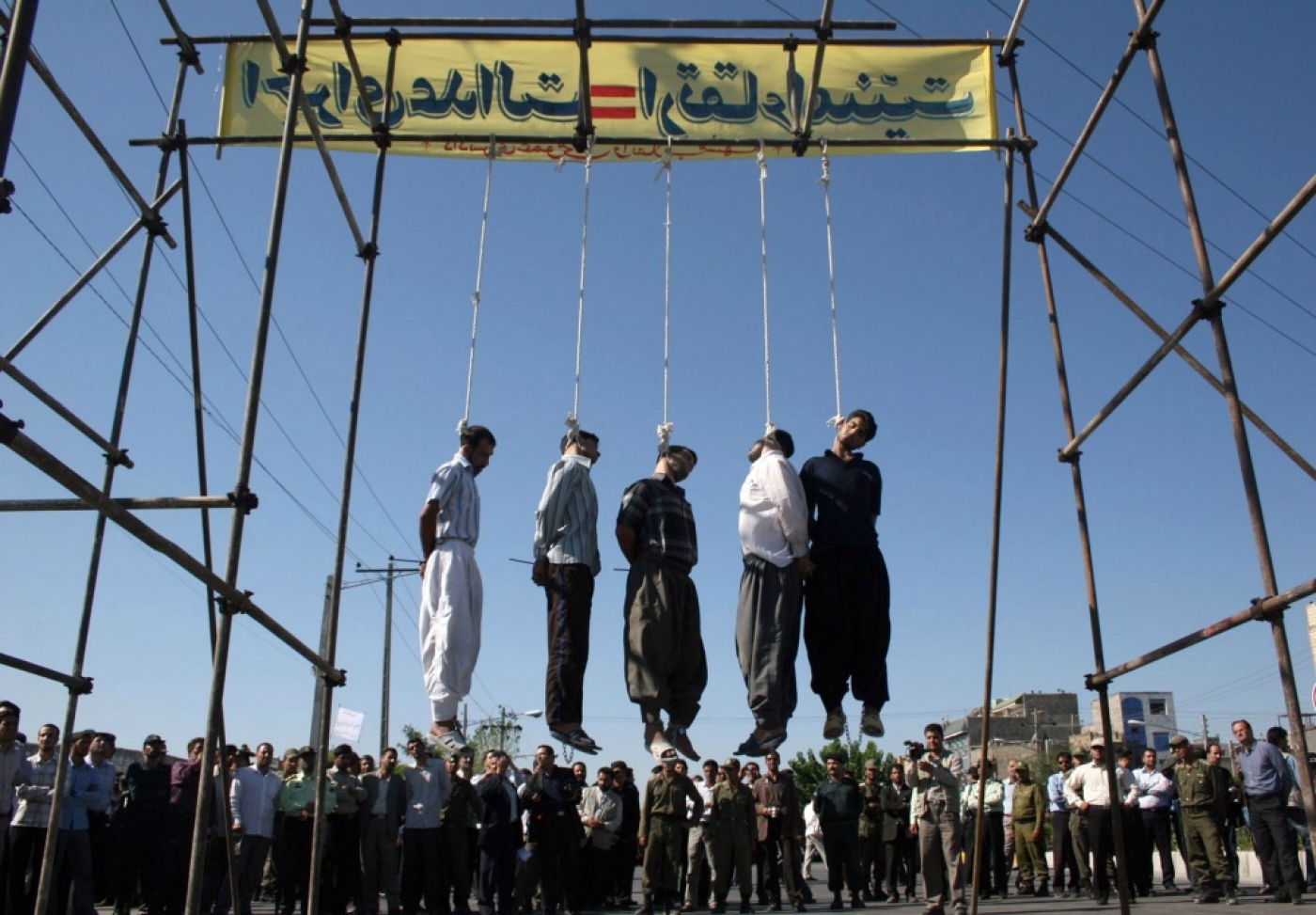 Five people hang limply from the nooses after they were executed in Iran's holy second city of Mashhad, on 01 August 2007 (AFP)
By
Tom Finn

Six international human rights groups on Wednesday urged the United Nations to cease its funding for counter-narcotics police operations in Iran until Tehran abolishes the death penalty for drug offenses.

In a jointly-signed letter the groups said that halting counter-narcotics aid – most of which comes from European governments – is justified because of “the widening gulf between Iran’s rhetoric and the realities of its justice system.”

One year after the Iranian presidential election of June 2013, and despite improvements in relations with the West, the use of the death penalty in Iran is higher now than in two decades.

Iran executes more prisoners than any other country except China, with 500 to 625 executed last year according to United Nations estimates. At least half of the condemned were convicted of drug trafficking.

Under international law, Iran and other countries with the death penalty are required to impose it only for the “most serious crimes,” which do not include drug offenses.

In Iran 70-80% of executions are for drug offences. National law stipulates that the punishment can be handed down for possession of as little as 30g of narcotics.

For many years European nations have seen Iran and Pakistan as important partners in the “war on drugs”, as both countries represent critical supply routes for traffickers looking to transport heroin.

A report by Reprieve, a UK-based charity and one of the letter’s signatories, highlights how European governments, through funding anti-narcotic operations administered by the UN’s Office on Drugs and Crime (UNODC), have facilitated thousands of executions in Iran, many of which are handed down to women and children as well as foreign nationals.

The report, European aid for executions, found that millions of dollars worth of funding – used to train and equip Iran’s anti-narcotics police with body-scanners, sniffer dogs, night-vision goggles, and all-terrain vehicles – routinely comes with targets encouraging arrests likely to result in death sentences, despite commitments from the UN and many donor nations to encourage global abolition of the death penalty.

“You look at those on death row in these two places and they are never the cartel kingpins but the poorest and most vulnerable, including children and people who are mentally ill or have learning difficulties,” said Maya Foa, Reprieve’s lead investigator.

“It is utterly hypocritical of countries like Britain to call for worldwide abolition of the death penalty and then support policies in breach of its own human rights rules that encourage the round-up and execution of scapegoats and mules,” she said.

“The UN and EU countries need to be unequivocal in their stance against the death penalty – and that includes ending the anti-narcotics funding that so often leads to executions.”

Some European states have stopped funding drug police in Iran. Acknowledging that the “donations are leading to executions,” Denmark pulled its funding in April 2013.

Have stopped support to #UNODC programme against narcotics trade in Iran. Use of capital punishment for drug crimes in #Iran unacceptable 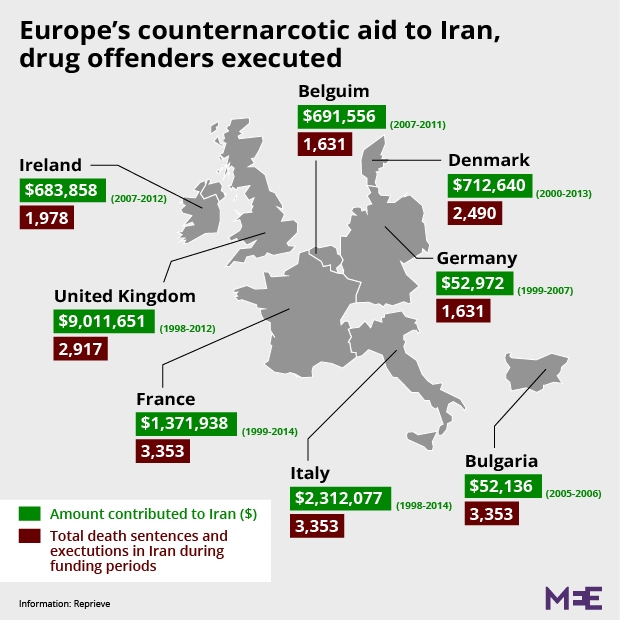 Even though some senior Iranian officials have spoken out against capital punishment for drug crimes, there have been signs that the pace of executions has accelerated this year.

On Dec. 4, Mohammad Javad Larijani, the secretary of Iran’s Human Rights Council, said in an interview with the France 24 news channel that “nobody is happy” about the number of executions and that he would like to see Iran’s drug punishment softened. “We are crusading to change this law,” he said.

But Rights groups say in their letter that a few days before Mr. Larijani’s interview, 18 convicted offenders had been hanged in Iran, and that this year at least 318 had been put to death, a pace that would surpass the 331 drug convicts executed in 2013.

Home to one of the most prolific flow of drugs in the world – a flood of heroin and opium bound for the Persian Gulf and Europe – Iran has for decades fought a battle against drugs that its leaders see as religiously inspired, saying it is their Islamic duty to prevent drug abuse.

Thousands of Iranian law enforcement agents have been killed in the fight against drugs often moved across its porous eastern border with Afghanistan, the world's largest illicit opium and cannabis producer.

Iranian authorities are seizing the highest amounts of opiates and heroin worldwide, according to a report by the United Nations Office on Drugs and Crime, which has advised Iran throughout the period. Iran has over two million addicts, the most in the world. 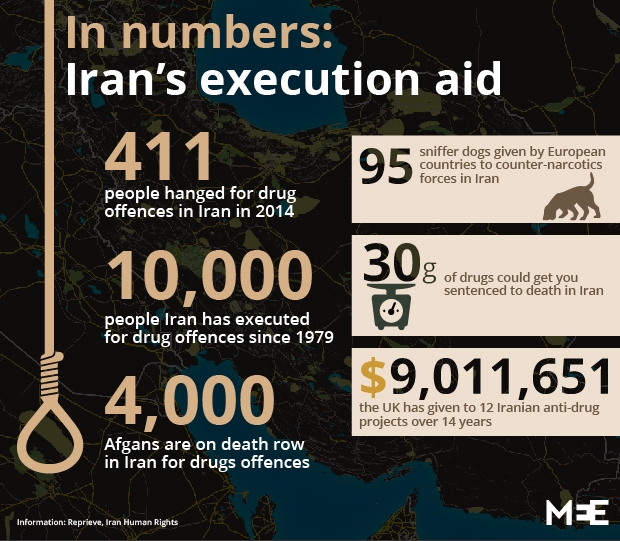 An instrument of power

Human rights groups say the deaths are designed to spread fear rather than curb the drug trade.

“These executions, every now and again in public, are a demonstration of power and brutality, they send a very clear message to people who are watching, that is what we are able and willing to do,” said Mahmood Amiry-Moghaddam, a professor of medicine and leading Iranian human rights activist.

“ISIS use the same method; is it very efficient way of spreading fear and terror and keeping control. It’s the strongest instrument of power the Iranian authorities have.”

War orphans are often forced to carry drugs such as heroin and crystal meth between Afghanistan and Iran. Reports suggest some are sentenced to death without appearing in court.

In April 2014, Jannat Mir, a 15-year-old boy from Afghanistan, was hanged in a prison in Isfahan, Iran after being charged with smuggling heroin across the Afghan-Iranian border.

“He didn't have access to a lawyer and the Iranian authorities didn't allow the family to take the body back to Afghanistan. So they had to bury Jannat Mir in Isfahan.”

Since 2011, France has co-funded a $5.4 million project to strengthen the capacity of counter-narcotics officers along the 1000 km frontier where Jannat Mir was arrested.

A month before Jannat was killed, in Vienna, Yuri Fedotov, the United Nations' drug czar, made a point of applauding the Iranians' effort to combat drug trafficking. "Iran takes a very active role to fight against illicit drugs." Fedotov told reporters. "It is very impressive."

Poppy production in neighbouring Afghanistan is booming; this year, its export are expected to account for 90 percent of the global heroin trade, and much of that will flow westward, through Iran, and end up in European markets. Iran has over two million addicts, the most in the world.

Since 1979, Iran has executed at least 10,000 alleged drug traffickers caught by the Anti-Narcotics Police. Iran lies on a major drug route between Afghanistan, Europe and Gulf states. Every year, it burns about 100 tons of seized narcotics as a symbol of its determination to fight drugs. 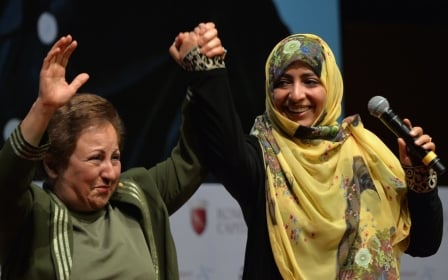