US election 2020: At one Iowa mosque, almost all caucus votes went to Bernie Sanders 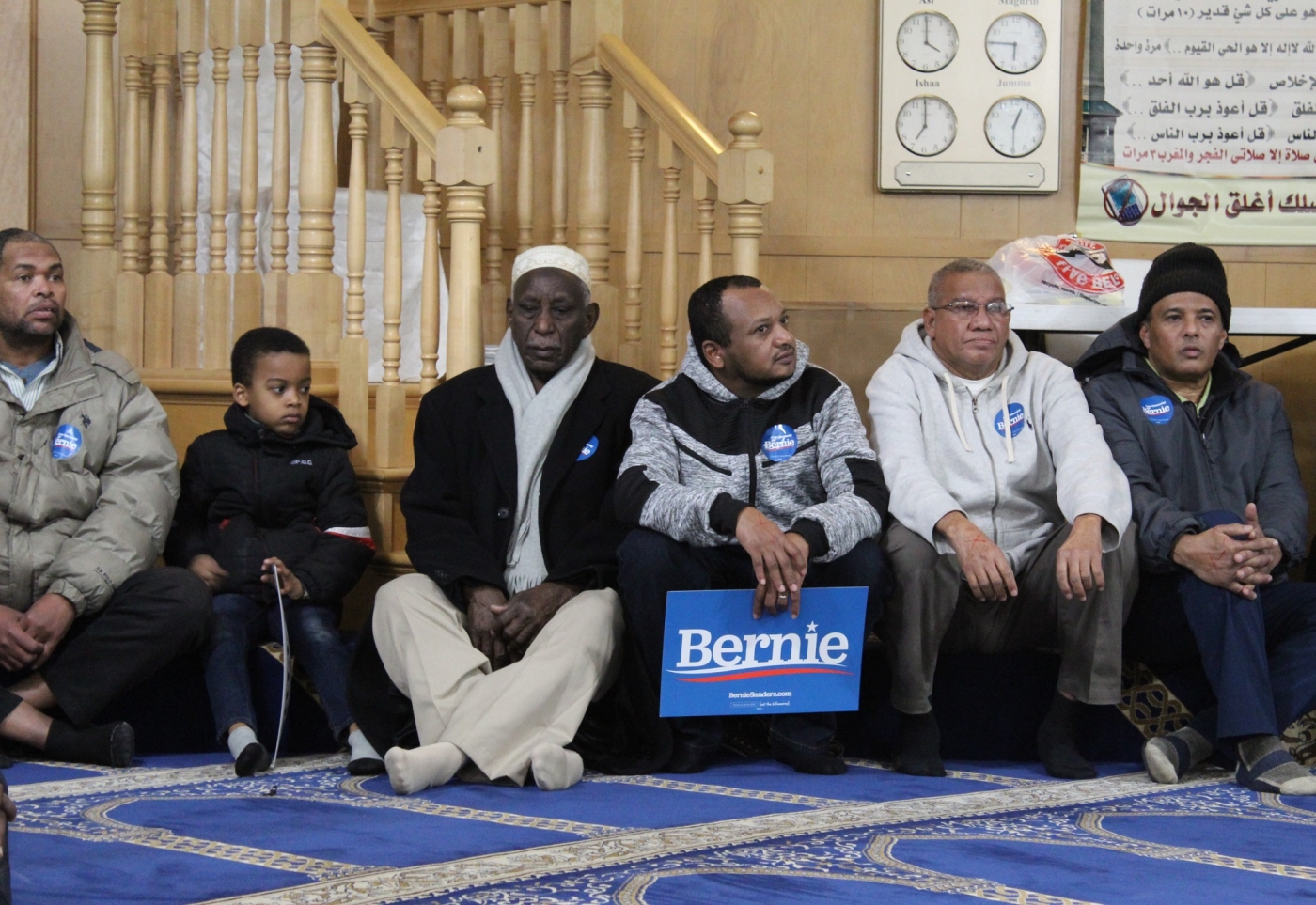 "Allahu akbar, Allahu akbar." The Muslim call for prayer, known as adhan, echoed through the Muslim Community Organization in Iowa as voters stood in a registration line outside the prayer hall, waiting to attend the Democratic Party's caucuses at the mosque.

- Ghazala Salam, president of the Muslim Caucus of America

The Muslim Community Organization was one of five mosques in the Des Moines area to turn into a caucus site, as the Democratic Party kicked off its contest to pick the nominee who will try to unseat President Donald Trump in November.

"This is truly a historic moment for you as Muslims in Iowa and Muslims across the country," Ghazala Salam, president of the Muslim Caucus of America, told voters midway through the process.

"They're watching you. You're laying the path forward on how Muslims should be engaging in the political process in this country."

Near unanimous support for Sanders

In caucuses, participants vote publicly by standing - or sitting in the case of the mosque - in a designated area for the supporters of their favoured candidate. The procedure also involves convincing other caucus-goers to join one's group.

But there wasn't much wooing to be done at the Muslim Community Organization on Monday.

Almost all caucus-goers were supporters of Senator Bernie Sanders.

When the caucus chair asked Sanders' supporters to sit in an area to the left of the mihrab - a hollow section in the wall that points towards Mecca - every attendee moved towards that section.

The initial vote was: 115 for Sanders, two for Andrew Yang, two for Elizabeth Warren and one for Pete Buttigieg. US election 2020: The Arab and Muslim vote may be decisive in Iowa
Read More »

Without any other candidate meeting the 15 percent viability threshold, the realignment process - a second round of voting - did not mean much.

Still, Sanders consolidated his support in the final tally, winning 119 votes and picking up all nine delegates from the mosque in the process.

"When you look at Bernie Sanders [and] his leadership in stopping the war in Yemen and stopping the war in Iran and speaking for human rights around the world, it's resonating with communities across America," said Congressman Ro Khanna, who co-chairs Sanders' presidential campaign.

Khanna visited the mosque before the caucuses started and spoke to voters and snapped photos with them.

In an interview with Middle East Eye, he said Sanders is building a diverse coalition.

"He's going to build the largest multiracial, multicultural coalition in the history of this country to usher in a new progressive era, and I'm so proud to see Muslim Americans, Jewish Americans, Hindu Americans, Christian Americans - all coming out for Bernie Sanders," the congressman said.

Imam Jaaphar Abdul Hamed, speaking in his personal capacity, delivered the speech to rally Sanders supporters ahead of the first county.

"Bernie Sanders is the best candidate for us… Bernie Sanders stands for the principles for justice not only in the United States, but everywhere," Abdul Hamed said.

Several Muslim caucus-goers cited the emphasis on "justice" as the reason for their support for Sanders.

"The justice aspect" draws Muslim-Americans to Bernie Sanders, said Kalynn Strain, who volunteers at the mosque. "Islam teaches that all people are equal."

For his part, Shukran Sultan, a 30-year-old caucus-goer who backs Sanders, said "it feels amazing" to take part in the elections at the mosque.

"Right now, we need some change. We need a leader who can unite us, who can bring us all together, who can help us out," he said.

Another apparent factor behind the Muslim community's support for Sanders is that he courted their vote. Khanna and various state campaign officials visited the mosque on Sunday, while Sanders' volunteers stood around the caucus site to assist people.

Over two hours at the Muslim Community Organization, MEE only saw supporters and volunteers from the Sanders campaign. US election 2020: Some Muslims in Iowa will caucus in their own mosques
Read More »

Josh Rhoen, a Sanders volunteer from Georgia, said the senator does not only condemn Islamophobia, but he is committed to countering it.

Salam, of the Muslim Caucus, also noted that it was remarkable for the diverse attendees of the mosque, which hail from Middle East, Africa and South Asia to unite behind a single candidate.

"So when you look at all of these issues, Bernie is the one who speaks to the diversity of our community."

"This is laying a path of how inclusive the process should be," Salam said. "Communities should be made to feel comfortable and save in their own environment."

Chaos ensued late on Monday as it became clear that the much-anticipated election results will not come out on a timely manner. The Iowa Democratic Party cited irregularities in reporting and quality control checks as the reason behind the delay.

Partial results were eventually released, showing Buttigieg and Sanders in a close race for first place. But the hold up is expected to minimise the boost that the victor usually receives from winning the nation's first caucuses.

Arab and Muslim advocates in Iowa had stressed that in such a tight race, their votes may decide the winner.

"Bernie understands that to win this election, it is necessary for us to build a multiracial, working-class movement that promotes a message of inclusion, rather than denigrating immigrant communities for cheap political points," Sami Scheetz, a constituency outreach director for the Sanders campaign, told MEE on Tuesday.

"Immigrant communities across Iowa understand that Bernie will fight for them in the White House, and that is why they decided overwhelmingly to support him at satellite caucuses across the state last night." US Elections 2020
US election 2020: Some Muslims in Iowa will caucus in their own mosques