US election 2020: The Arab and Muslim vote may be decisive in Iowa

In a tight presidential race, Iowa's Arab- and Muslim-American community could have major say on results 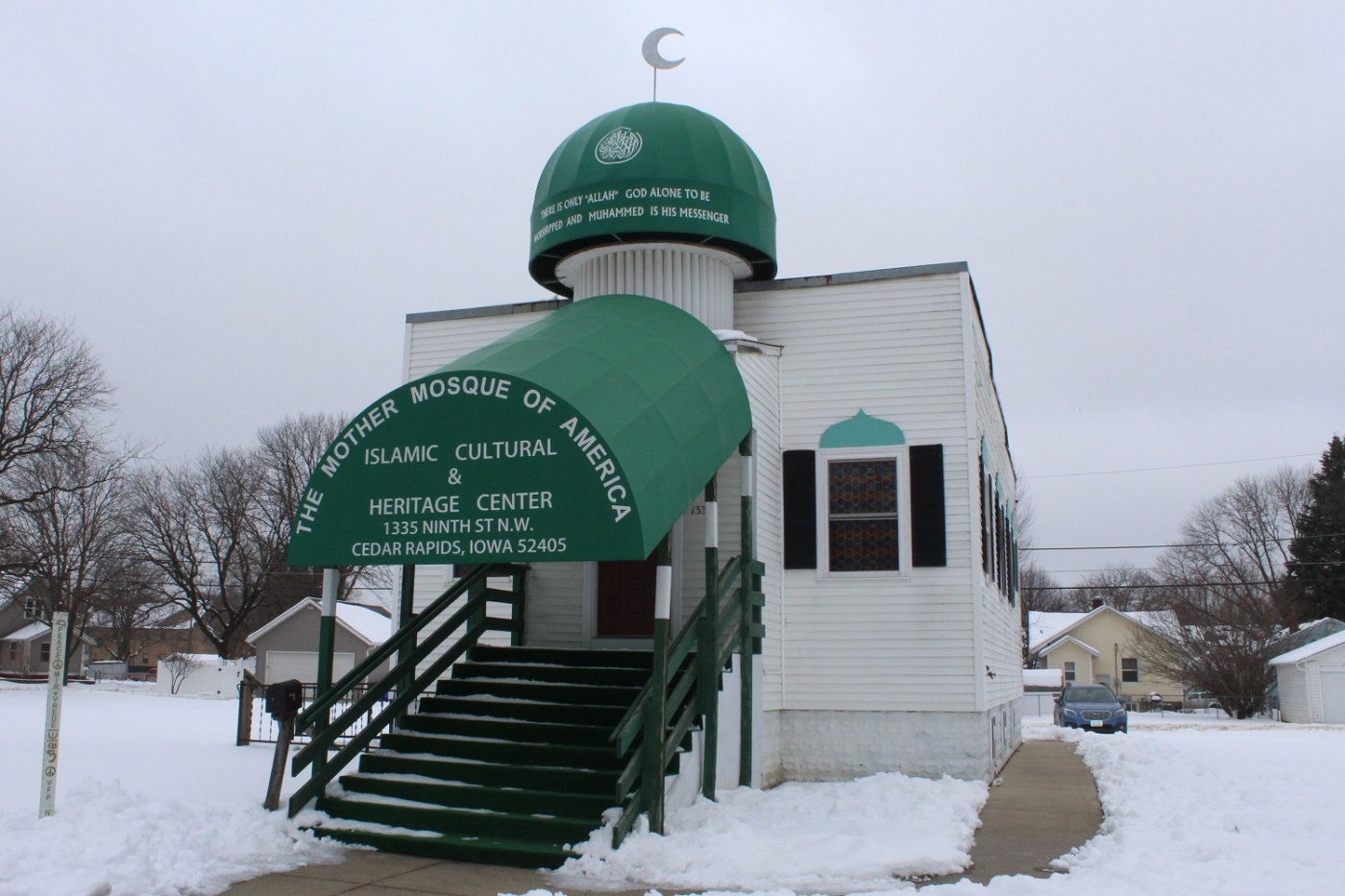 Iowa. It's known as America's breadbasket. The nation's heartland. A state of farmers, wheat and cornfields. The rural midwest.

It's also so much more than that.

A sparsely populated state of just 3.1 million people, Iowa is home to some of the oldest Arab and Muslim communities in the country. Immigrants from modern-day Lebanon and Syria settled here in the late 1800s. US election 2020: Some Muslims in Iowa will caucus in their own mosques
Read More »

In Cedar Rapids, a quiet city on a small river that feeds into the Mississippi, they constructed America's first Muslim house of worship - The Mother Mosque of America.

The white and green building stands proudly, nearly 90 years after it was built, as a witness to the nation's diverse history.

On Monday, at the Iowa caucuses, which will set the tone for the Democratic presidential primaries, Arab and Muslim advocates say their communities may have a decisive role to play in choosing the party's nominee and potentially the nation's next president.

"We want every Arab-American and Muslim-American across the state of Iowa to participate," said John Dabeet, a Palestinian-American organiser based in eastern Iowa.

Iowa is the first election contest of the primary season. The last three Democrats who won the Iowa caucuses - Al Gore, Barack Obama and Hillary Clinton - became the party's nominee.

Dabeet, who supports presidential candidate Elizabeth Warren, said Iowa's Arabs and Muslims, who number in the tens of thousands, can make a "huge difference on the outcome" of the election.

With several candidates locked in a tight race for the top spot, every vote is important. If Arab- and Muslim-Americans come out in the thousands, they can easily determine the winner.

Activists say various campaigns, particularly those supporting Warren and Senator Bernie Sanders, have been courting the Arab and Muslim vote.

And in a sign of the growing Muslim presence, five mosques will be caucus sites.

Now organisers are focusing on increasing the turnout. In the absence of organisational structures, that effort has fallen on individuals who are decrying political apathy in the community.

Dabeet said getting involved politically is the only way for Arabs and Muslims to make themselves heard in the United States. "We don't want to just do it in Iowa. We want to do it all over the country to get where we need to get."

Besides domestic issues, he said, a top priority for Arab voters in the state is foreign policy. "The Palestinian issue is the number one issue for us."

That advocacy for the Palestinian cause is driving Arab and Muslims in Iowa to the campaigns of Warren and Sanders, he added.

Warren and Sanders represent the left-wing progressive base of the Democratic Party, which has been growing increasingly sympathetic to the Palestinian cause.

Warren has said that as president she would ensure that US aid to Israel is not used to support the annexation of occupied Palestinian territories.

And Sanders has vowed to use Washington's assistance to Israel as leverage to stop settlement expansions and improve the humanitarian situation in Gaza.

Dabeet, who co-chairs the US Palestinian Council advocacy group, said the aim should not only be to defeat Donald Trump.

"We also want to replace him with the right candidate," he told Middle East Eye.

Scheetz, who described himself as the son of a Syrian immigrant mother and a white working-class father, said Arab and Muslim Iowans can play a "huge role" in the caucuses.

"I truly think because of the way the caucuses are set up and how powerful and influential the group is, in such a close race they will be the deciders as to who wins tomorrow," Scheetz told MEE in Des Moines on Sunday, adding that Sanders' campaign is exerting major efforts to court their vote.

Many prominent Arabs and Muslims have been "feeling the Bern" since the Vermont senator first ran for president in 2016. In last cycle's Michigan primaries, Sanders defeated Hillary Clinton by a large margin in predominantly Arab-American neighbourhoods in cities like Dearborn.

In 2020, America's two Muslim congresswomen Rashida Tlaib and Ilhan Omar endorsed Sanders. In fact, both legislators have been campaigning for the Vermont senator in Iowa.

Scheetz said communities across America, regardless of religion or ethnicity, share the same basic economic concerns.

But addressing foreign policy has been particularly effective in engaging Arab-Americans, he added.

"Foreign policy is something that our campaign has been able to resonate with these voters on," he said.

'I truly think because of the way the caucuses are set up and how powerful and influential the group is, in such a close race they will be the deciders as to who wins tomorrow'

"Bernie has for the past 30 years been very progressive and consistent in advocating for anti-war propositions."

Scheetz cited Sanders' opposition to the Iraq war and his efforts in leading a bipartisan congressional resolution to end US support for the Saudi-led war in Yemen, which was eventually vetoed by Trump last year.

"He's been very consistent and especially with his support for the Palestinians," Scheetz said. "He stood up on the debate stage and said in front of millions of people that we need to respect the rights of both the Israelis and Palestinians. And that is something he doesn't believe is being done right now in the White House."

The Iowa Democratic Party's platform includes progressive language on the Israeli-Palestinian conflict thanks to the efforts of activists like Abuissa. It calls for Palestinian statehood and ensuring equal rights between Israelis and Palestinians.

Still, Abuissa, who leads the international affairs subcommittee on the party's platform committee, said challenges remain in organising the community ahead of the elections with most people busy tending to the demands of daily life.

He added that Arabs and Muslims have also been discouraged by bigoted attacks.

While many activists told MEE that the state's population is "nice" and welcoming, one of Iowa's four congressional districts is represented by Steve King who has a history of making racist and Islamophobic statements.

"That's my philosophy - to become proactive, get energised by those attacks," Abuissa said. "We want to influence the process."

In Cedar Rapids, about an hour north of Iowa City, Taha Tawil, the imam of the Mother Mosque, said Muslim-Americans like all citizens want a president who is fair and just.

He said Muslims should organise and participate in the process to confront the "hate" that has come to the surface in recent years. But he stressed that mosques in Cedar Rapids have avoided politics out of respect for the separation of church and state.

"There's enthusiasm in the community. Some people are saying they will be in line for the caucuses at 5:30pm," Tawil told MEE. The caucuses start at 7pm local time.

But there has not been a big push for a single candidate, according to the imam.

"Sometimes in the same family, the father wants Bernie and the mother wants Elizabeth and the children want someone else." The Mother Mosque was built by immigrants from Lebanon in 1934. It was the first building constructed in North America for the purpose of being a mosque.

The house of worship - a rectangular, white building - stands in a residential subdivision west of the Cedar River. The ten steps leading to its front door are covered with a green canopy that sits below a small dome crowned with a silver crescent above the mosque's facade.

If it were not for the green additions, it could be mistaken for a large home in the neighbourhood.

"This mosque is proof that there is religious freedom in this country," Tawil said.

Iowa's Arabs and Muslims seem to have nothing but praise for their state. And as Monday's contest approaches, activists want their community to become a recognisable force in the state's electoral politics.

Miriam Amer, a Muslim American activist in Cedar Rapids, said campaigns seeking the Muslim vote are sending staffers and volunteers to talk to people and hand out literature outside of mosques.

Meanwhile, activists are trying to increase the turnout.

"The young people are spreading it between themselves on social media. They're really doing a great job. The older people are doing it through word of mouth," Amer said. "That's how it's been done, the old fashioned way, talking to people."

Asked about the candidates who seem to be gaining the biggest foothold within the Muslim community, Amer said: "Elizabeth and Bernie".