As protests turn to clashes across West Bank, PA forces are seen beating protesters in the streets of Bethlehem After days of clashes at the Al-Aqsa Mosque complex, protests flared in East Jerusalem and several West Bank towns on Friday leading to clashes between demonstrators and Israeli and Palestinian Authority (PA) forces.

In Bethlehem, Middle East Eye witnessed PA forces attacking protesters in the streets with batons. At one point, a protester was surrounded by at least eight security officers who kicked him on the ground. Thirteen young people were detained during the clashes, Maan News Agency reported.

Later on Friday, eyewitnesses told MEE that locals had closed the streets of the town using burning tires in retaliation against the PA attacks.

Critics have attacked the PA for what they say is its close security collaboration with Israel and for security spending which reportedly saw nearly 30 percent of the PA's budget used on security forces in six different agencies in 2014. 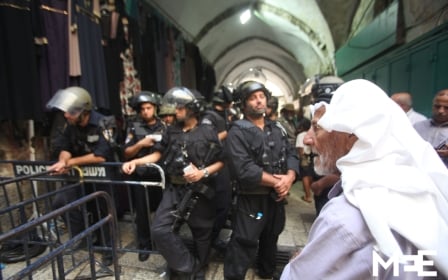