Palestine-Israel: How Joe Biden can restore credibility to US policy With the defeat of US President Donald Trump last November, and notwithstanding the ensuing challenges, including the chaos at the Capitol on 6 January, Israel intently began crafting a new political platform and strategy to quickly impose on the newly elected administration of Joe Biden, with typical concern only for itself and its extreme right leadership and ideology.

During the Trump era, particularly in the second half, Israeli strategy focused mainly on the erasure of Palestinian national rights, including the State of Palestine; practical measures were taken to advance "Greater Israel" via the annexation of large areas of the West Bank; and, if necessary, preparing itself to accept a fragmented Palestinian entity subjugated to Israeli control as the solution to the Palestinian "inhabitants" in the “Greater Israel”.

With Trump's defeat, however, it has become clear that this strategy cannot be implemented.

Thus, Israel began seeking an alternate strategy, utilising all resources. The goal of course is to ensure Israeli advancement while keeping alive the above-mentioned vision for the future.

It seems that the new Israeli strategy relies on the prevention of any serious steps to implement the two-state solution, while attempting to complete the central objective, of both past and future, of legitimising its settlements and averting any opposition by the new Biden administration or others to the settlements and their expansion.

By various means Israel is already conveying messages to the new administration that it will not accept any efforts towards the two-state solution and that, therefore, any attempt by the administration in that regard will be a waste of time and will not achieve anything, similar to what happened during the Bush, Clinton and Obama years and even worse.

Israel and its friends are saying that the alternative to this is to take small steps to build trust and improve the Palestinian situation and the socio-economic conditions of the Palestinian people. Worse still, some Israelis are talking only about the necessity to ensure the safety and security of all those present between the Mediterranean Sea and the Jordan River, whether in the framework of the one-state solution or not.

The meaning here is clear and the shameful objective is once again attempting to legitimise settlements and settlers and even to confer rights on them rather than condemning their existence, which constitutes blatant colonisation, i.e. a war crime.

What is the Palestinian strategy in the face of all this? It is difficult to talk about a clear strategy that has emerged and is taking shape; at least this writer has no knowledge of such a thing with the exception of some traditional positions that are reiterated from time to time. However, it may be useful to propose certain matters to assist in the efforts to develop the Palestinian strategy. 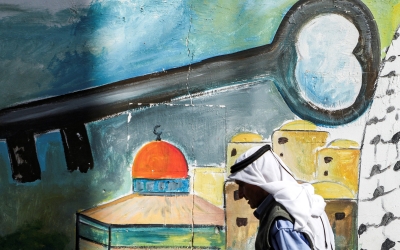 Is the UAE plotting with Israel against Palestinian refugees?
Read More »

First, the Biden administration should be asked to take some measures or steps before dealing with the political solution. Such measures or steps could be characterised as reversing Trump policies and steps in the Middle East. This should be part of the overall policy of the new administration alongside such matters as correcting US policy on climate change, the World Health Organisation (WHO), Nato, and the JCPOA (Iran nuclear agreement).

These measures and steps should include: resumption of funding to UNRWA; resumption of assistance to the Palestinian side; restoration of the US Consulate General in Jerusalem, and nullification of Trump’s declaration on Jerusalem and transfer of the US embassy. In addition, the Biden administration should cancel the labelling of settlement products as "Israeli" products; take a firm position against settlement activities; and finally reopen the Palestinian representation in Washington DC, shut in 2018, which, it is hoped, will be on a different political and legal basis than in the past.

Along with a clear affirmation of support for the two-state solution, these are essential steps to be taken by the new administration and necessary to restore credibility and balance to US policy on the Israeli-Palestinian conflict. It is imperative to begin with these steps in order for Israel to understand that we are now in a new era and that it must engage differently. Otherwise it will be impossible to make any progress thereafter.

In response, Israel will - of course - oppose and resist those steps, particularly restoration of the Consulate General and steps related to the settlements, despite the fact that it does understand that "Trump’s vision" and his administration’s policies are dead for all practical purposes.

The Trump era showed the fragility of conditions related to the Palestinian-Israeli conflict and that, in the absence of a real solution, deterioration can happen quickly and without end

This is yet another reason why the administration must take these steps rather quickly and as part and parcel of restoring traditional American policy and its natural evolution.

Then comes the more difficult task, namely the work to achieve a political solution to the conflict. This will likely require time in view of the many priorities facing the new administration such as combatting the coronavirus pandemic, improving economic conditions, overcoming the acute polarisation caused by the Trump presidency, in addition to global issues connected to climate change, international organisations, relations with China, etc.

It seems likely that the new administration will not be intent on pursuing a unilateral approach, a hallmark of past American monopoly of the peace process. As such, it should be open-minded to a multilateral mechanism and perhaps even to fostering a broad international consensus in the form of a solution. This will of course be a positive and logical development, despite the fact that it will require more time.

It will also require Palestinian political activism starting with the forging of a common position with some Arab states such as Egypt, Jordan and Saudi Arabia.

Such a position would elaborate the contours of the political solution which must be based on the positions of principles endorsed internationally coupled with some innovative implementing ideas which would attract broad international support, including the support of the new administration.

We must state that the basis for the solution should be the existence of the State of Palestine on the 1967 borders, and that negotiations should be between the two states: Israel and Palestine.

A set of principles

The Biden administration could be advised here to endorse a set of principles such as those laid down by Obama's outgoing Secretary of State John Kerry in 2016, and then to work on a bilateral agreement based on those principles. It is understood then that the matter might take some time but the administration should strictly adhere to the two-state solution based on the 1967 lines and not flirt with any other solution - because the fact of the matter remains that such solutions do not exist. 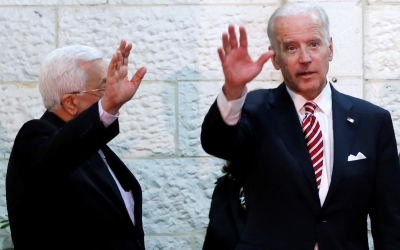 Complacency, intentional delay or fear of potential confrontation with the Israeli government will likely have catastrophic and far-reaching consequences in the region. If anything the Trump era showed the fragility of conditions related to the Palestinian-Israeli conflict and that, in the absence of a real solution, deterioration can happen quickly and without end.

Claims that agreements reached between some Arab countries with Israel prove that it is possible to ignore the Palestinian question while achieving a different kind of strategic stability are empty claims. The reality is that those agreements came only after the Trump administration exerted tremendous pressure and paid huge sums in return and at different levels, thus creating an unsustainable situation.

The dust has not yet settled on those agreements; the incentives are totally different for each party and the differences in rationale and incentives indicate future disagreements. In any case we shall see the results in this regard in the coming period, and in any case these agreements or others do not constitute an alternative for a reasonable solution based on international legitimacy and the internationally endorsed parameters.

The general weakness of the Arab situation should not allow for baseless narratives about Israel’s ability to control the situation and drive it to its benefit. Undoubtedly, the United States’ partial withdrawal from the region prompted some of these developments.

Such a withdrawal could also be reconsidered by the new administration - a re-engagement from Washington could change many of the assumptions about Israel's control of events. The United States cannot afford to ignore the existence and continued aggravation of many of the region’s problems and it should engage itself in trying to help solve them.

Nasser Qudwa
Dr Nasser Qudwa is the head of the Yasser Arafat Foundation and member of the Fatah Central Committee. He is the former permanent representative of Palestine to the United Nations and foreign minister. He led the Palestinian team at the International Court of Justice in the case against the wall built by Israel in the occupied Palestinian territory (2004).