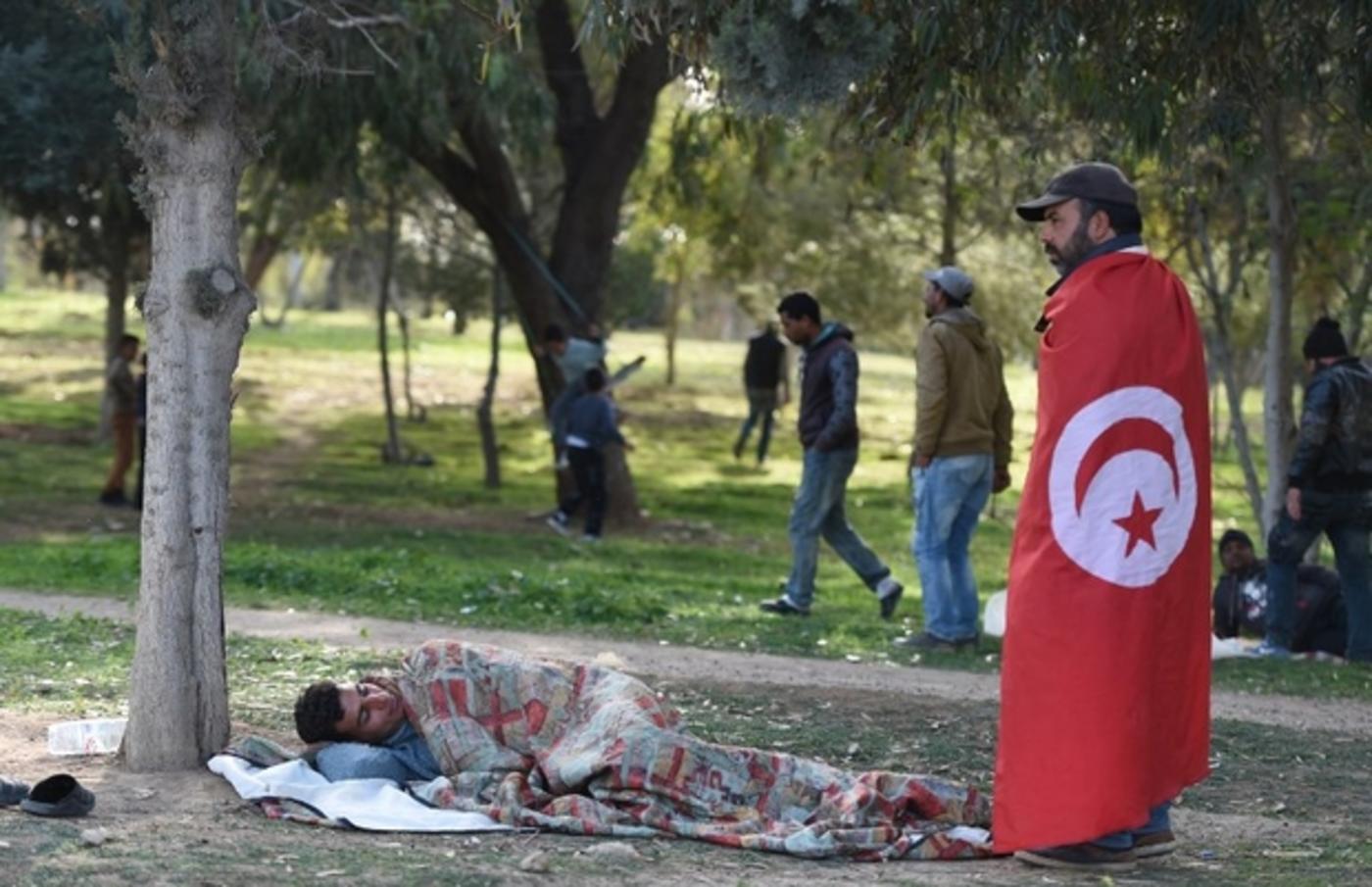 On Sunday, 17 December, it will be seven years since Mohamed Bouazizi, an informal street vendor from Sidi Bouzid, took his own life. In the revolution that followed, he became a symbol of Tunisia's marginalised, those who had to create their own jobs, without rights, support or security.

The economic origins of the Tunisian revolution lie in predation and exclusion. Both came with their own figurehead – while Bouazizi became the symbol of the excluded, the dictator's wife, Leila Trabelsi, emerged as the symbol of a corrupt and predatory state elite.

One of the most significant structural threats to the post-revolutionary Tunisian state is that its approach towards its economic origins has been deeply lopsided.

More precisely, the interaction between Tunisian elites and international donors has moved the country towards an economic reform programme that claims to address the effects of the overreach of the authoritarian state – cronyism, corruption, inefficiency – but does not sufficiently address the effects of its neglect.

This leaves Tunisia's government stuck between an economic agenda focused around austerity, and domestic demands for social justice.

But even more so, it has left the Tunisian state structurally and politically incapable of reforming those parts of its economy that are structured by segmentation and willful neglect.

The most striking example of this is the country's informal economy.

While informal jobs are disproportionately prominent in the southern and interior regions, they span the entire country.

They take a wide variety of forms – people selling on the side of roads or in weekly markets, smuggling goods across the borders with Libya and Algeria, providing tutoring or translation, or being employed by a formal company without being issued a contract.

While they are often not paying income taxes or have a commercial registry, people in the informal economy still often pay formal (market fees) or informal (bribes) fees to state agents.

At the same time, they remain excluded from social security and the infrastructure available to formal businesses, and suffer the vulnerabilities associated with living on the wrong side of the law.

Abuse from state agents and security forces is commonplace, reinforcing the feeling of oppression, indignity and second-class citizenship that has been a central theme in 2011 and in more recent protests.

Given this context, it is surprising how little movement there has been on the side of the post-revolutionary Tunisian state to set out a reform programme that helps those in the informal sector.

There is no coherent national strategy on the issue, and most politicians are shockingly uninformed, usually reducing the issue to a problem of tax evasion. This may be because there is no quick fix for the issue - as experiences from other countries have shown, reforming informal economies requires a multi-dimensional approach that needs to be embedded in wider labour market and tax reforms.

However, there are two more proximate explanations.

First, touching Tunisia's informal economy means touching a complex economic structure that has for decades been a key mechanism for the maintenance of state stability, be it through the provision of jobs for the vulnerable or the enjoyment of vast rent streams for the well-connected.

Reforms addressing this sector, that further marginalised one group, or endangered the privileges of the other, would likely trigger grave political consequences.

Secondly, some elements of such reforms would likely be costly and hence clash with the current austerity-focused reform ethos.

Yet, addressing informality remains imperative for sustainable and inclusive development in Tunisia. The political freedoms of the post-revolutionary period have actually created some advantageous conditions here, as informal actors have used their new-found liberties to set up associations and organisations.

"The freedom to have a dialogue," the head of an association of informal vendors told me, has fundamentally changed their engagement with the state since 2011. While fear of police reprisal was omnipresent before the revolution, "now we can really talk about all kinds of issues, and do so openly."

Unfortunately, Tunisia's large – formal – civil society actors struggle with the issue. While the Tunisian General Labour Union (UGTT), the main labour union, is restricted by the fact that many members of the informal economy are not strictly workers, the approach of UTICA, the employer's association, remains primarily determined by its economic interests.

However, smaller organisations have quickly built up valuable expertise – the fantastic work of the Tunisian Inclusive Labour Initiative (TILI), including in Sfax and in Ben Guerdane, could be instructive here.

The first step of any reform process should be to approach these groups, alongside other civil society actors, to foster a constructive dialogue about the most needed reform options, and re-building some trust.

Second, creating legal frameworks for positions in the Tunisian economy for which no legal structure exists so far, and which are hence necessarily informal, would help to pave a way towards formality for a many Tunisians - especially those connected to weekly markets.

Third, it is important to move the debate on informality in Tunisia beyond the issue of taxation, and explore options that would extend key services of the formal sector, such as social security and access to training, unions and credit, to the informal sector.

This could not only improve the economic prospects of the sector, but more importantly diminish some of its indignities, hence bring us back to 2011. It is not a coincidence that informality affects Tunisia's youth and its women disproportionately. And it is not a coincidence that it dominates the economies of Tunisia's southern and interior regions.

Informality in Tunisia is indicative of a divided and segmented economy, a marker of widespread pockets of vulnerability, of an authoritarian legacy that has left the country with a carefully calibrated patchwork quilt of state predation and state neglect.

Addressing the effects of this neglect needs to be a key element of any development strategy in Tunisia. As addressing this history of neglect will require a strategy of aggressive state investment in infrastructure, social services and in education, this clashes almost directly with the austerity-focused ethos of the current reform agenda.

It stands at odds with IMF conditionalities for Tunisia and risks endangering the privileges of a well-connected formal business class. This is a powerful coalition against reform. And yet every effort needs to be made to free up space for these kind of efforts.

Because any economic reform package that does not address the marginalities of Tunisia's economy will most likely double down on them, the ability to take advantage of new economic opportunities in the formal sector will once again not be available to all.

This risks reinforcing the segmentations, the insider-outsider dynamics that have undermined Tunisia's economy for decades. And it once again marginalises those people the lofty promises of reform are usually claiming to prioritise: youth, women, and street-vendors in Sidi Bouzid.

-Max Gallien is a PhD candidate in International Development at the London School of Economics, specialising in the Political Economy of North Africa. He has conducted extensive research on informal economies particularly in Southern Tunisia and Northern Morocco. He holds an MPhil in Modern Middle Eastern Studies from the University of Oxford, and was a Scholar in Residence at Al-Akhawayn University in Morocco.

Photo: In February 2016, unemployed Tunisians sit at el-Mourouj park in Tunis after taking part in a 400km march from the city of Gafsa to Tunis to demand work (AFP)

Arab Spring
The power of soil: How our precarious climate shaped the Arab Spring
Politics
Labour antisemitism: Why it has become impossible to criticise Israel
Opinion
Warning to all tyrants: The Arab Spring lives on 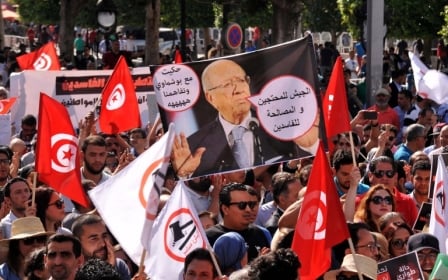