In the face of ongoing military intransigence, can Sudan’s democrats complete the transition envisioned by their Declaration of Freedom and Change, and establish a longer-lasting democracy than those that followed the country’s last uprisings in 1964 and 1985?

There are many promising signs. Partly as a result of the fact that the ideology of the regime of ousted President Omar al-Bashir alienated wide sectors of Sudanese society, the signatories to the declaration now embrace a much wider social and political spectrum than before.

The opposition coalitions that negotiated the previous transitions comprised professional unions and political parties based in the urban, riverine centre. Those same groups are still present among the “Forces for Freedom and Change”, but they are now joined by a wide array of youth activists, civil society movements and regionally based rebel groups.

During the previous uprisings, it took only five days and 11 days respectively for democratic forces to succeed in their objective of ousting the regime. This time around, it has taken nearly four months - yet this could prove to be a virtue, as it has given the signatories to the Declaration of Freedom and Change a much greater period of time to develop consensus around their programme.

In 1985, the forces of the then-National Alliance drew up their national charter a day before the military leadership under Abdulrahman Siwar al-Dahab “sided with the people”. As soon as the military intervened, it began to negotiate with the political parties separately and sidelined the professionals.

The result was a much shorter transitional period, which alienated a number of professionals who had pushed for a lengthier period of technocratic governance to remove the traces of the authoritarian system.

They were also forced to acknowledge Dahab himself as interim president, and work under the Transitional Military Council that he formed.

Today, the transitional council of Abdel Fattah al-Burhan - who replaced Bashir and his one-day successor, Awad Ahmed Ibn Auf - seems less capable of dominating a civilian opposition that is relatively more united, with strong backing from the African Union and Western nations for an immediate end to military rule.

When Burhan and his council first seized power, they proposed that they would govern for two years, but continuing protests by the crowds gathered at the army headquarters appeared to force them to downscale their demands. They subsequently requested that they have a degree of representation in a civilian government, notably through the interior and defence ministries.

In response, the Forces for Freedom and Change has delivered to the military council a framework for transitional governance, which stipulated that there would be one military representative on a presidential sovereignty council otherwise led by civilians, and two representatives of the “regular forces” via the ministries of interior and defence in the 17-person interim cabinet.

This arrangement represents a compromise between two models of interim governance from past transitions - the 1964 model, whereby a civilian “sovereignty council” oversaw a purely civilian government, and the 1985 model, in which a transitional military council akin to that of today oversaw a civilian cabinet, including a police officer and soldier in the interior and defence ministries.

Significantly, the framework also includes a 120-strong transitional legislative assembly, constituted of individuals participating in the Declaration of Freedom and Change, 40 percent of whom should be women.

Given that the declaration stipulates a much lengthier transitional period than in previous years (six months in 1964 and a year in 1985, compared with four years now), the new interim regime will need a much greater legislative capacity than its 1985 predecessor, which deferred the debate over former dictator Jafaar Nimeiry’s controversial Islamic penal code to the elected parliament that would follow it.

It is significant that references were made to the “military” and “regular forces” (ie, army and police) - not to the Transitional Military Council. One prominent signatory to the Declaration of Freedom and Change - the Sudanese Professionals Association - earlier called for the interior and defence ministries to be awarded to former soldiers forced into retirement by Bashir’s 1989 coup.

However, these current proposals were focused principally on the structure of governance, leaving the question of the presence or non-presence of members of Burhan’s council to be negotiated. Burhan has taken some steps to strengthen his position, forming close ties with Egypt, the UAE and Saudi Arabia, securing promises of economic support from the latter.

Having overseen Sudanese forces operating as part of the Saudi coalition in Yemen, he clearly aligns his council with their axis. Yet, there is considerable popular hostility towards further regional intervention in Sudan - especially considering that the government sale of Sudanese agricultural land to Gulf companies was a significant source of public resentment in the years leading to the uprising.

On Sunday, Saudi Arabia and the United Arab Emirates promised to send $3bn worth of aid, throwing a potential lifeline to the military rulers.

There is further popular concern regarding the deputy president of the Transitional Military Council, Mohamed Hamdan Dagalo, aka Himeidti, whose Rapid Support Force militias remain controversial because of their involvement in both the Bashir regime’s ruthless counter-insurgency in Darfur and repression of the last set of protests in 2013.

Himeidti met a number of Western diplomatic representatives on behalf of the military council, and the strong presence of his troops on the ground in Khartoum puts civilian negotiators in a very difficult position.

Activists have accused his forces of attempting to break up the current sit-in outside army headquarters.

It also appeared likely that Himeidti's presence in the transitional council might deter rebel groups from the marginalised regions from engaging in talks about the transitional government.

They did not participate in the initial round of discussions with the generals, in which the Declaration of Freedom and Change signatories were represented largely by party and professional figures similar to those that negotiated the last two transitions in 1964 and 1985.

However, even as they were negotiating, the Forces of Freedom and Change maintained that "our people’s ongoing strikes and protests represent the guarantor for carrying out the revolution’s aims".

As hundreds of thousands of protestors gathered at the sit-in within army headquarters, the Sudan Professional Association declared that a list of names for a "civilian sovereignty council" would be announced on Sunday. However, instead of announcing these names, the Forces of Freedom and Change ended their negotiations with the Military Transition Council and called on the protesters to intensify their mobilisation against the body it described as a "extension" of Bashir’s regime.

At present, there is no sign of major splits within the opposition, although there have been divisions over the approach to be taken towards the military council.

Some of the established political forces were more open to working with Burhan personally - if not the Islamists on his council - than the Sudan Professional Association, which issued independent statements that took a less compromising position.

However, the statement breaking off negotiations was made in the name of the "Forces of Freedom and Change" as a whole. This is significant, particularly given that one of Burhan’s manoeuvres was to claim that his handing over power will depend on their being a consensus among the various political forces regarding transitional arrangements.

The unity of the civilian opposition will be crucial if the next phase of the uprising is to succeed. 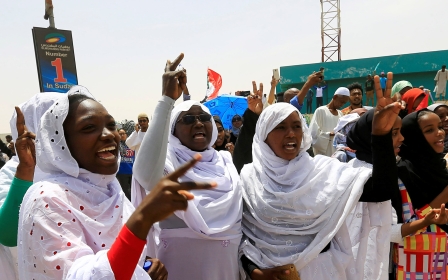