Israel in the Balkans: Why did Serbia and Kosovo sign up to Trump's deal? 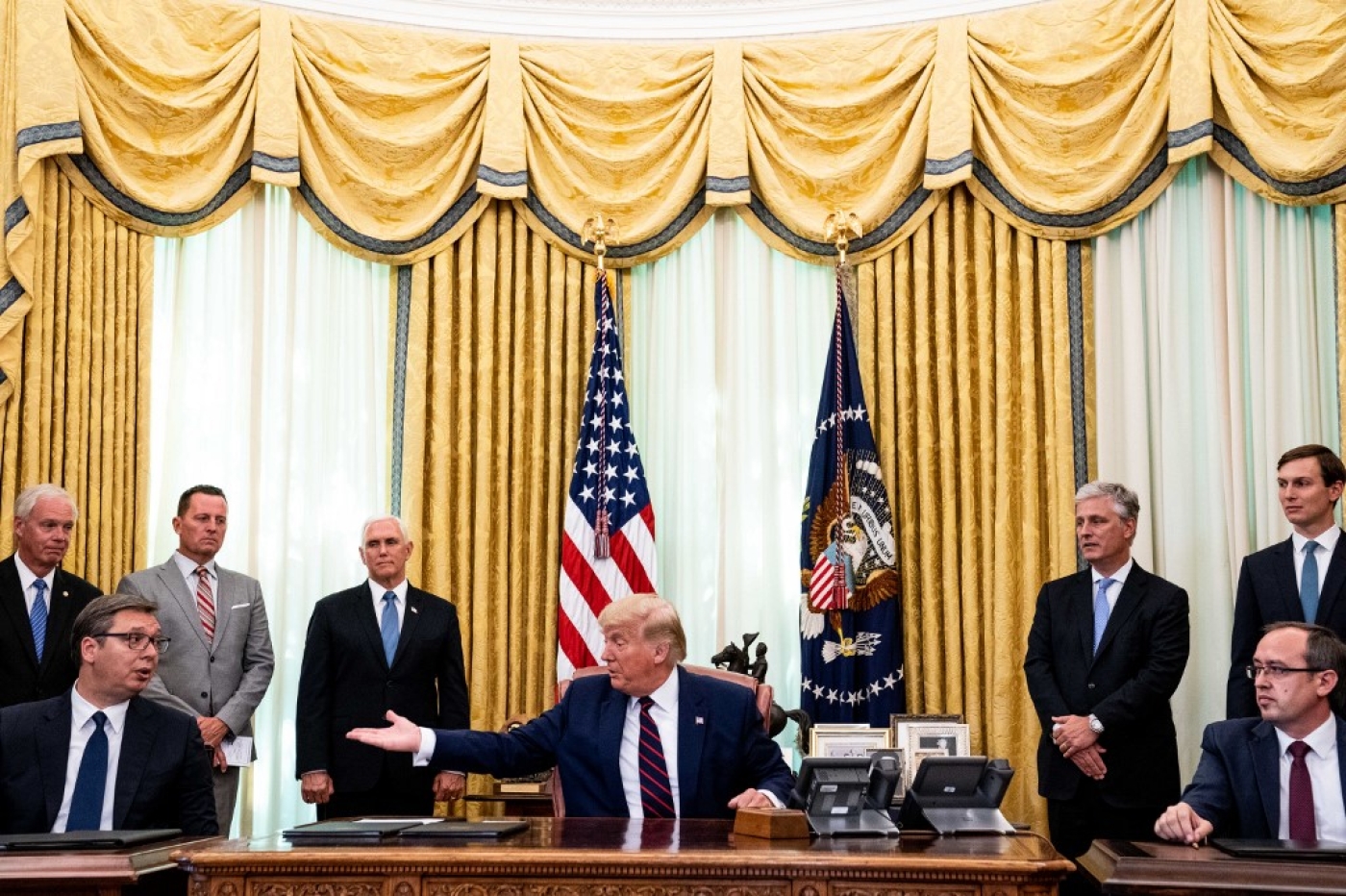 On 4 September, the White House was the place of a strange political proceeding. US President Donald Trump observed the signing of an economic normalisation deal by Serbian President Aleksandar Vucic and Kosovan Prime Minister Avdullah Hoti.

The meeting was not strange because Serbia signed an agreement concerning an entity, Kosovo, that it does not recognise and still formally considers its territory. It was not because it is dubious as to whether the signed documents fit the description of a legally binding international agreement.

What was strange was that the country that profited most was one that had nothing to do with the territorial dispute in the Balkans: Israel. The deal stipulates that Serbia will move its embassy in Israel from Tel Aviv to Jerusalem. Kosovo also agreed to mutual recognition with Israel, followed by the opening of an embassy to Jerusalem.

Searching for a win

How did this happen? Searching for a big foreign policy win to use in his re-election campaign, Trump, through his envoy Richard Grenell, had engaged in the long, unresolved dispute between Serbia and Kosovo. But with Trump’s re-election chances damaged amid his mishandling of the coronavirus pandemic, dispute resolution in the Balkans is not an issue that would resonate broadly with the American public, so he brought in an issue that would: Israel.

A day after Trump helped broker a normalisation agreement between Israel and UAE, Grenell invited Vucic and Hoti to the White House. For Trump, scoring a victory for Israel by increasing the number of Islamic countries that recognise it, and the number of countries that have embassies in Jerusalem, is a way to court various groups needed for his re-election.

With the deal involving Kosovo and Serbia, Trump aims to win votes among Jewish communities in Florida and Pennsylvania and Albanians in Michigan

Trump never hid the fact that his decision in 2017 to move the US embassy to Jerusalem was a way to win votes from conservative evangelicals close to Israel. With the deal involving Kosovo and Serbia, Trump also aims to win votes among Jewish communities in Florida and Pennsylvania and Albanians in Michigan - states required for his electoral win.

Trump hailed the fact that Muslim-majority Kosovo had recognised Israel, while also praising Vucic for moving the embassy. Soon afterwards, Bahrain also announced that it would normalise relations with Israel.

For the UAE deal and the Kosovo-Serbia deal, Trump has now been nominated twice for the Nobel Peace Prize, giving him material for political marketing.

Israeli Prime Minister Benjamin Netanyahu has even more reasons to be pleased, as evidenced by his enthusiastic approval of the Serbia-Kosovo deal. Israel quickly reciprocated by recognising Kosovo just minutes after the White House deal.

Israeli foreign policy in the Balkans has undergone a full renaissance. In recent years, Israel’s policy in the region has been to weaken the EU’s stance on Palestine and to build partnerships with countries beyond its Middle Eastern, Islamic periphery.

On the former point, Serbia opening an embassy in Jerusalem would be a win, coming from an EU membership candidate and a country that - unlike most others in the Balkans - has frequently voted in favour of Palestinian membership in international institutions.

The White House agreements also cemented Israel’s status as a new geopolitical player in the Balkans by strongly tying Israel to the two most strategically consequential ethnic groups in the region, Serbs and Albanians.

There were calculations in Pristina and Belgrade that also helped Israel. Serbia’s campaign to convince countries to rescind their recognition of Kosovo was dealt a blow, while Kosovo avoided angering its key patron, the US, after previously refusing to lift tariffs and restrictions against Serbia.

There have been reports that Serbia will not move its embassy to Jerusalem if Israel recognises Kosovo, but this is probably just stalling and hard bargaining. Vucic knows the price of angering the US president.

Sacrificing Israeli recognition of Kosovo may be worth it to build a stronger partnership with the US, something Belgrade has failed to do for decades.

The idea of gaining access to the US via Israel was certainly on Vucic’s mind when he spoke at the annual conference of the American Israel Public Affairs Committee in March. After the White House meeting, Vucic boasted that he was able to open the White House doors to Serbs.

Yet, there are risks for the involved parties as well. The EU has already warned both Serbia and Kosovo against opening their embassies in Jerusalem. By following Trump’s lead, Kosovo did what it had avoided for a long time, getting drawn in to the tumultuous politics of the Middle East.

Serbia is also endangering its partnership with many in the Islamic world. The Palestine ambassador to Serbia expressed concern over the deal, as did another major partner of Serbia, Turkey. Serbia has abandoned its traditional diplomatic stance of laying low on big international conflicts and has effectively aligned itself with Trump’s Middle East policies. It has even designated Hezbollah as a terror group, risking retaliation against its soldiers in the UN peacekeeping mission in Lebanon.

Trump is not guaranteed that he will still be in the White House in 2021, despite his deal-making in the Balkans and the Middle East. The only ones with little to worry about are Netanyahu and his government, whoever wins in November.

Vuk Vuksanovic
Vuk Vuksanovic is a PhD researcher in international relations at the London School of Economics and Political Science (LSE) and an associate of LSE IDEAS, LSE’s foreign policy think tank. He writes widely on modern foreign and security policy issues and is on Twitter @v_vuksanovic.