EXCLUSIVE: UK will use US embassy in Jerusalem despite condemning move British officials will make use of the new US embassy in Jerusalem, despite the UK government condemning the move. Sixty-two Palestinians were killed by Israeli soldiers during protests enflamed by the embassy's relocation last week.

When US President Donald Trump announced the American plan to recognise Jerusalem as Israel’s capital last December, the United Kingdom rebuffed the decision, saying it would be unhelpful for peace prospects.

Last week, the UK, along with France, Germany and much of the international diplomatic corps, boycotted the ceremony inaugurating the new embassy in Jerusalem’s Arnona neighbourhood.

But in a meeting three days later with members of the British Palestinian Policy Council, UK Middle East Minister Alistair Burt rejected the group’s request that the UK continue the boycott and refuse to work in the new embassy, according to an account from an attendee.

“When we asked him to confirm [that] UK officials would not attend meetings at the embassy going forward, as the UK does not recognise it, he was very clear that they would attend,” the source said.

The Foreign Office has now confirmed that, while the UK does disagree with the move, diplomats and other representatives will attend meetings at the embassy going forward.

News of the UK’s decision to attend meetings at the new US embassy comes after Britain abstained on Friday during a United Nations Human Rights Council vote on a resolution to assign international war crimes investigators to look into Israel’s response to protests that have seen 110 Palestinians killed since late March.

The vote on the resolution passed, with 29 countries supporting. In addition to Britain, 13 other countries abstained and only the US and Australia voted against.

It also comes as Paraguay on Monday became the second country in a week, following Guatemala, to join the US and also move its embassy to Jerusalem.

Jerusalem’s status has long been a point of contention in the Israeli-Palestinian conflict. The Palestinian Authority wants East Jerusalem to be its capital, but Israel wants the whole city as its capital.

The issue has been considered one that would be decided by Israelis and Palestinians in a final status agreement, but the American decision to recognise the city as Israel’s capital broke with that tradition.

“Our position on the status of Jerusalem is clear and long standing,” UK Prime Minister Theresa May said in a statement following the Trump administration's announcement of the embassy move.

“It should be determined in a negotiated settlement between the Israelis and the Palestinians, and Jerusalem should ultimately be the shared capital of the Israeli and Palestinian states.”

Contacted by MEE, Kamel Hawwash, vice chair of the British Palestinian Policy Council, confirmed that the meeting had taken place and said that the members had been “stunned and shocked” by the UK’s willingness to attend meetings at the embassy.

'It shows the hypocrisy of the UK'

“It shows the hypocrisy of the UK, in that it appears to talk in a principled way, but when it comes to action it doesn’t,” he said.

Ben Jamal, director of the Palestinian Solidarity Campaign, agreed that the UK government needed to follow up its position against the move with action.

“For the UK government to treat the situation as business as usual and attend meetings at the US embassy will only serve to normalise what the US has done,” he said.

“We keep hearing that Theresa May’s government is willing to stand up to the Trump administration when they act in a wrong fashion. This will be a litmus of their willingness to do so.”

Chris Doyle, director for the Council for Arab-British Understanding, said he wasn’t in the least bit surprised by the UK's stance.

“It was inevitable that Britain would not boycott this new embassy at all and that it would attempt to influence the US in whatever moves it will make to try to reignite a peace process,” he said.

Sir Jeremy Greenstock, former British ambassador to the United Nations, said that the UK would never cut off communication with the US and that meetings will likely be held fairly quickly at the new embassy.

Less than a downgrading of the relationship, he said, skipping the opening ceremony for the embassy should be seen as a gesture - and one that could be repeated soon.

“Watch what happens on July 4th [American Independence Day],” he said. “I suspect that the Europeans will not go to the American ambassador’s party... whether the British ambassador himself goes, I don’t know.”

But Jamal said he thought the UK should give a clearer statement.

“If your position is that international law says no country should have an embassy in Jerusalem, then you follow that through and you indicate that your meetings will need to be elsewhere,” he said.

“To do anything else normalises the situation and that you accept this as a fait accompli.” 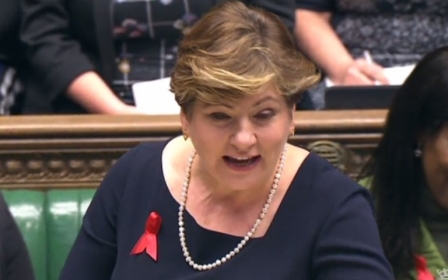