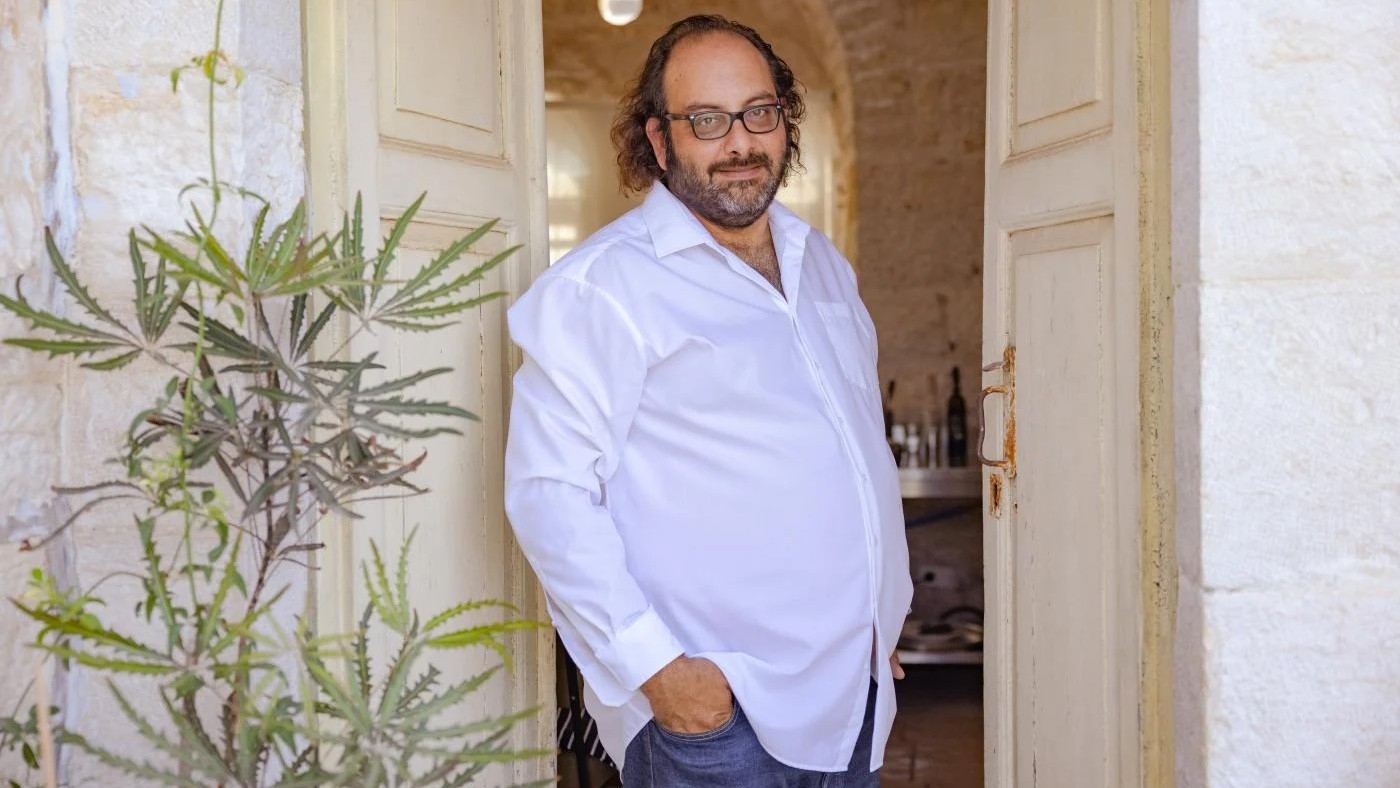 Fadi Kattan is famous for his Bethlehem restaurant Fawda, which is Arabic for chaos (Supplied)
By
Nadda Osman
in
London

I meet chef Fadi Kattan in London’s Notting Hill neighbourhood a few weeks ahead of his new restaurant's opening.

The restaurant, Akub, sits among a row of colourful houses and quaint cafes that have become the hallmark of the area immortalised in the Julia Roberts and Hugh Grant romcom of the same name.

Kattan leads me through to the restaurant, which presently resembles a large construction site - with loose wires hanging overhead and a strong smell of sawdust.

The kitchen is not yet fully installed and the tiles still need laying out, but Kattan assures me that the restaurant is already fully booked for opening day.

The French-Palestinian chef is famous for his restaurant in Bethlehem, named Fawda, which is Arabic for chaos.

“It’s called that because it’s based on chaos," he explains.

"We don’t have a menu. People pre-book, and I cook whatever I get my hands on from the farmers," he adds.

In Palestine, Kattan's business philosophy is based on how many people will be eating at his restaurant on any given day, he then heads off to local markets to get hold of whatever ingredients he can get his hands on.

Customers eat whatever he decides to make with the ingredients, something he says forced him to think creatively.

“But imagine trying this in London, there’s no way it could work,” he says.

Since the English capital offers different obstacles to the ones found in the West Bank, he says that Akub will be taking a slightly different direction.

Akub will instead have more of a set menu, which will include dishes inspired by the different regions of Palestine.

“I felt there was this massive gap between what is cooked in restaurants in Palestine and what was being made at home," he says. "I had this idea of wanting to transform home-cooking into something we could serve at a restaurant.”

One thing that is staying the same however, is his work with local farmers and producers.

“I don’t think we can work with products from massive unknown corporations, where we don’t know the origins,” he says. “The fish we’re going to use at Akub comes from the UK, and we know the fisherman who’s bringing it.”

The spices and other condiments, however, will be coming from Palestine, via small companies and suppliers he enjoys close working relations with. “Even Nasser Abu Farha who does the olive oil, I’ve known him for 10 years," he explains.

For Kattan, the chef is more than just the food he cooks. He believes that a great deal of their success comes from farmers, who he says are passionate, wake up before the chefs and put in long hours of hard labour.

“We chefs don’t exist without the farmers.”

The impact of the occupation

Kattan's success on the Palestinian food scene has been despite the difficulties placed on his work by the Israeli occupation.

“You can’t move freely. You can’t access water freely. Occupation is not a one-off thing, it’s a system that's lived there for several years,” he explains, further describing how the farmers he works with often can’t access their own land.

“I work with a guy who gets me squash around Christmas. His land is circled by four settlements. Does he deliver or does he not deliver?"

Such obstacles mean that his approach of working with any ingredient available is not just a novelty but a necessity.

Such concerns are obviously not as pressing at the Notting Hill restaurant, meaning Kattan can focus more on bringing the Palestinian experience to London.

“We’re not doing kitsch stuff,” he says, when I ask him about the decor. He emphasises that it won’t be orientalist either, nor will it convey any religion, as it’s intended to celebrate Palestine.

One of Kattan's main aims is to convey the diversity of Palestine, and to help people recognise how rich Palestinian culture and heritage is, from the Ottoman to Greek influences in cities, such as Haifa and Jaffa.

Akub, he says, will carry elements of these various influences in its appearance, from the rusted pink shades which resemble backyards in Palestine, to green colours that are reminiscent of the vast olive groves.

As is evident thus far, for Kattan, one of the most important aspects of being a chef is the provenance of the ingredients he cooks with.

“I will not work with coffee if I don’t know where it comes from, or in what condition it was picked... are there things like child labour involved?” he says.

“I don’t have a problem with an Israeli chef cooking with labneh (a strained yoghurt), if they say if it’s Palestinian or cooking kebab and saying it’s from Aleppo… the problem happens when the history of the region is disregarded and foods are labelled as Israeli.

“That same chef will be championing truffles from Alba and telling you the story of the farmer, so why not use freekeh and say it’s from the West Bank?”

For Kattan, such behaviours are intrinsically linked to Israel's occupation.

“It becomes normalisation when we find it extremely cool to have sumac and labneh on a menu without saying where it comes from.”

Another issue Kattan highlights is the misinformation that takes place alongside the erasure of the origins of ingredients and dishes.

He uses couscous and maftoul as an example, stating that they are two very different grains, often passed off as "Israeli couscous".

Nevertheless, Kattan does not want politics to be the backdrop to his restaurant and the food he makes.

“It frustrates me as a Palestinian to always justify why we’re doing a Palestinian resturant," he complains, "we’re just doing a restaurant like everybody else, it’s not a militant act."

'We’re just doing a restaurant like everybody else, it’s not a militant act'

He simply says that he wants to champion traditional Palestinian culinary techniques, some of which are over 2,000 years old.

According to Kattan, cooking has the power to preserve Palestinian identity in the diaspora.

Something particularly special for him, is seeing Palestinians in the diaspora, who can’t speak Arabic or who haven’t been to Palestine, enjoy their home country’s traditional food.

“Food has preserved our identity in spite of everything, especially in the diaspora,” he says, pointing out how Palestinian communities in places like Haiti and Latin America have adapted their traditional dishes with local influences.

The sentiment is reflected in Kattan's YouTube series, in which he cooks with Palestinian grandmothers. According to the chef, food holds the key to preserving memories, something most commonly shared by women, who, he says, often don’t get enough credit.

Staples that Kattan will bring to Akub include the spice, sumac, which he says he carries with him in his backpack wherever he goes.

Others include Arabic gum and the seed of sour cherry, which he says deserve more recognition because they add flavour and all important texture too.

Kattan also has fun experimenting with his menu.

“Right now I’m playing around with the idea of a molokheya sandwich,” he says, smiling. He has already tested out a prototype on a few people after waking up one morning wondering what to do with left-over molokheya.

Molokheya, or Jew's mallow, is a traditional dish which resembles spinach soup, varying in consistency depending on where in the Middle East it is made.

Akub is also about celebrating.

“We (Palestinians) are not just people living in misery. We’re proud people,” he says.

A prime example of this is ka’ak or ma’moul, date-stuffed biscuits which Muslims eat to celebrate Eid, Christians enjoy at  Easter and Jews make on Yom Kippur.

When I ask Kattan about any advice or the secret to a good meal, he simply replies “nafas”.

The word, difficult to translate, roughly means soul, spirit, or breath. Kattan describes it as "magic" and "desire of hospitality".

The restaurant in London’s Notting Hill opens to the public late November and is open for bookings. 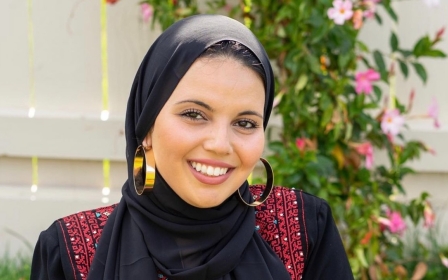 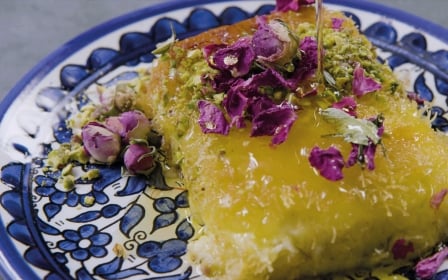 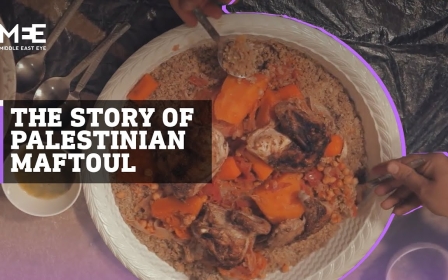