Air wars: How Etihad flopped and rivals soared in Gulf battle for the skies

Abu Dhabi's Etihad is cutting routes even as Emirates and Qatar Airways expand. But is a new competitor about to shake up the aviation market? 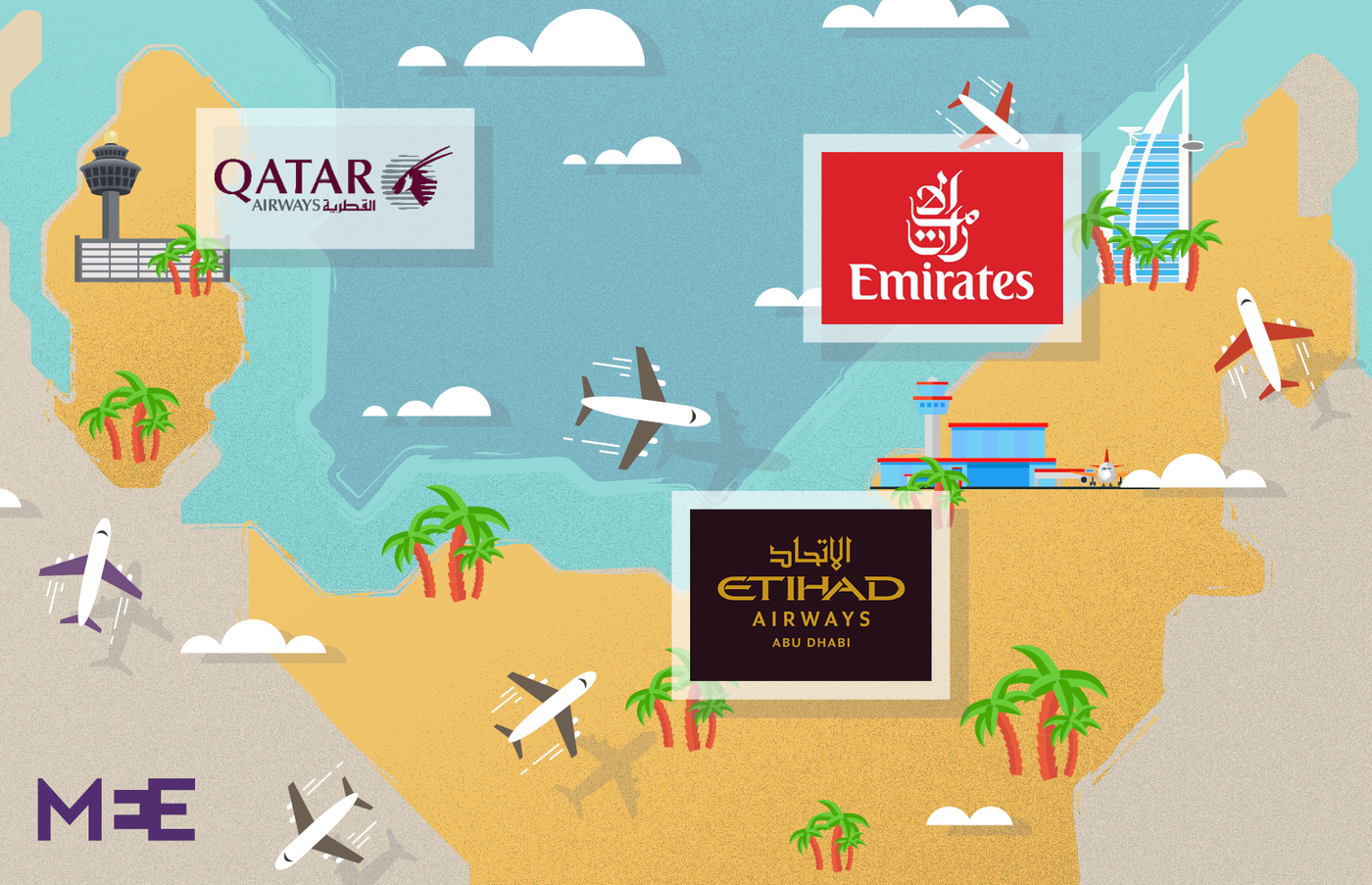 During the past decade, competition for passengers in the Middle East has increased.
By
Abid Ali

Launched 15 years ago and backed by Abu Dhabi, the UAE's richest emirate, Etihad Airways plotted a course to take stakes in airlines around the globe to rapidly build a network to match regional rivals, Dubai-based Emirates and Qatar Airways.

The plan imploded when two of its investments, Air Berlin and Alitalia, collapsed in 2017. The airline took an $808m write down, essentially admitting that investments were not worth the money they spent on them.

Over the last two years, Etihad has racked up losses of more than $3.5bn - $1.52bn for 2017 and $1.95bn in 2016. Last week Etihad drew a line in the sand, announcing new management appointments, structure and strategy.

James Hogan, Etihad’s former chief executive and president, and the architect of the airline's original strategy, left the company in 2017. Three rounds of job losses have seen more than 4,000 employees also depart in the last 18 months, according to an executive who spoke to Middle East Eye on condition of anonymity.

But for the 23,000 employees left behind, more jobs are under threat with senior managers, executives and the lower ranks still waiting to learn their fate.

Etihad did not respond to requests for comment from MEE, but Tony Douglas, chief executive of the Etihad group, told Reuters last week that the restructuring of the airline was expected to lead to further redundancies among senior and mid-level managers.

Etihad 'late to the party'

“In the aviation industry, first mover advantage is very important and Etihad was slightly late to the party,” Tim Coombs, director of Aviation Economics, told MEE.

“They attempted to replicate what was going on down the road [in Dubai, where Emirates is based]. Their starting point was a revenue growth mindset rather than to be profitable.”

It’s a mindset familiar to many startups, in particular in the modern digital economy where billions are raised and spent acquiring customers. But Etihad decided to invest in existing airlines that were already in trouble.

“Etihad believed it could turn around Air Berlin and Alitalia. Air Berlin was up against Lufthansa and low-cost airlines, EasyJet and Wizz,” Coombs said.

“And it just couldn’t compete because it couldn’t decide whether it wanted to be a full-service airline or a low-cost airline.

“Etihad came and thought they could sort out their financial problems, restructure the airlines. Alitalia thought: 'Here comes a government-funded airline to pump in more and more money'.

“The staff thought things could go on as before and there would be no cut in pay and improvement in productivity. The reality was Etihad was defeated by a well-organised unionised labour force.” 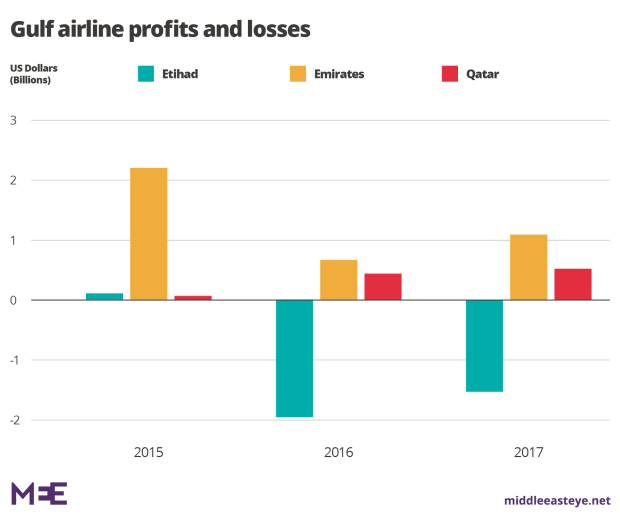 Now, the global ambition appears to have gone.

Etihad is discarding routes, resizing to be little more than a middling airline serving Abu Dhabi rather than global citizens. It also faces fierce competition and a backlash from airlines in Europe, as well as opposition in the US to the generous state support that the main Middle Eastern airlines receive.

Plans to take a delivery of 98 planes from Boeing and Airbus are to be scrapped, leaving it with a sizeable fleet of 110 passenger jets.

'How do you compete with Dubai?'

“It’s hard to understand what Etihad plans to do," Coombs said. "The population of Abu Dhabi isn’t large. If you give up the hub and spoke model to serve your local market, you do need a sizeable market to provide direct point-to-point connections.

“The trouble with secondary hubs is that they don’t have the same kind of connections and services as the big hubs. How do you compete with Dubai?”

If Etihad’s strategy is unclear to industry observers, then it appears that company employees are also confused about the way forward.

The Etihad executive told MEE that the company was working on various proposals six months before Hogan left the airline. Those proposals were shelved.

In the shakeup, the well-respected executive Peter Baumgartner has been sidelined from managing the airline business, with the recently hired Douglas taking on that responsibility.

But it’s the appointment of UAE national Mohammed al-Bulooki as the chief operating officer which gives an indication of who will run the airline in the future. Al-Bulooki is seen as the next chief executive of Etihad, the executive told MEE.

It’s all part of the country’s “Emiratisation” programme of educating, training and promoting nationals into high-ranking positions.

Etihad's troubles come with its regional rivals also concerned about possible turbulence ahead.

Emirates, the largest airline in the Middle East which made a $1.1bn profit in the financial year ending March, is slowing the pace of its expansion. And Qatar Airways’ chief executive Akbar al-Baker has warned the company may need a state bailout because of the impact of the Saudi-led blockade on Qatar.

Qatar Airways on the offensive

Qatar Airways has gone on the offensive to protect its business, buying a near-10 percent $622m stake in Hong Kong-based Cathay Pacific. That stake gives it a foothold in China, which is expected to be the biggest aviation market in the world within a decade.

But Baker’s attempt to buy a stake in American Airlines was loudly rebuffed by the Texas-based airline, which accused it and other Gulf carriers of benefiting from state subsidies.

Qatar Airways, Emirates and Etihad all deny the allegation.

However for years the top three airlines in the United States – American, Delta and United - have complained about the subsidies Middle Eastern airlines have received, forgetting about the tax breaks and laws protecting US-based airlines from bankruptcy and from which they have benefited.

The US airlines’ resistance to the Gulf carriers’ greater penetration into the US market crumbled amid a realisation that the status quo would not change, even under President Donald Trump’s protectionist “America First” agenda.

All have now signed up to an agreement to openly publish detailed accounts, the irony being that the Middle East airlines were already doing so. It’s not clear what the US carriers gained from the deal.

With a collapse in bookings due to the blockade by Saudi Arabia and the UAE, Qatar is hoping the deal with Cathay Pacific will enable it to route more passengers through its Doha hub, the Hamad International Airport, which has been considered one of the world's best airports since it opened in 2014.

“The aviation industry is going the same way as any other industry. In the US there are now three main airlines. There is a similar picture emerging in Europe. In the same way there will be consolidation globally, with 10 players controlling 90 percent of the market,” Coombs said.

'Qatar has selected its stakes wisely. It’s clearly going to be among the survivors in the industry'

“Qatar has selected its stakes wisely. It’s clearly going to be among the survivors in the industry with the Oneworld Alliance [the 13-airline alliance that also includes British Airways, Cathay Pacific and Qantas]. Regulation permitting, I’m sure they would like to buy IAG,” Coombs said.

John Strickland, director of JLS Consulting, said the blockade remained a "major handicap” as the Doha-based airline was forced to spend more on fuel to fly around Saudi, Bahrani and Emirati airspace. It has also lost some lucrative flights to Saudi Arabia, the UAE and Egypt.

But where Etihad failed with its strategy of buying some less-than-stellar airlines, Qatar has excelled.

But not all of Etihad’s investments have proven to be duds. It has a 25 percent stake, bought five years ago for $379m, in India’s ambitious Jet Airways, as well as owning parts of Australia’s Virgin Australia and Air Seychelles.

Etihad has dropped two of its six routes to the United States, including to the gateway to Silicon Valley in San Francisco, which means Indian software professionals need to find alternative routes.

Worse, Jet Airways is drawing closer to Air France and Delta after opening its European hub in Amsterdam, routing more passengers through the Netherlands than through Abu Dhabi, which means less revenue for Etihad, the employee told MEE.

The tie-up between Jet and Etihad comes with the Mumbai-based airline caught in its own battle for survival amid the intensely competitive Indian market, where many airlines are struggling with debts and need to attract investment to expand.

But for Jet it makes no economic sense to fly to Abu Dhabi, as it receives less revenue than if it flies passengers to Amsterdam. Air France/KLM have better options to fly passengers on routes in Europe, while Delta has more destinations in the United States.

Meanwhile Abu Dhabi’s last competitive advantage is about to be lost, as Dubai receives approval to clear transit for travellers to the United States.

Pre-clearance at the purpose-built US Customs and Border protection facility at the airport will allow travellers to clear customs and be treated as domestic passengers when they land on US soil.

It’s another win for Emirates, which has blazed a successful independent strategy avoiding alliances and providing industry-leading services throughout its cabins.

The airline, which depends on Boeing 777s and Airbus A380s, may need to broaden its fleet to smaller aircraft as it enters new markets.

“I'd expect to see Emirates continue to grow and to play a major role in global aviation,” Strickland told MEE via email.

“It will however evolve its model with smaller aircraft being added to the fleet giving it more flexibility in market selection and reducing reliance on connecting traffic flows. Its product and pricing will also evolve to reflect different market dynamics.”

Emirates’ dominance is affecting non-Gulf based airlines as well. Virgin Atlantic plans to end its daily flights between Dubai and London next March.

But while Etihad’s troubles may be a boon for Emirates and Qatar Airways, both are facing a new threat.

It’s not that the mighty can’t be toppled, rather that rivals will mimic the strategy of market leaders and take a chunk of their business.

“Turkey plans to open an airport that can handle 90 million passengers a year when it opens," said Coombs, "and Turkish Airlines is looking at the same model, handling passengers between Europe and Asia. Turkey will be a good competitor."