Are tensions at al-Aqsa reaching another boiling point? 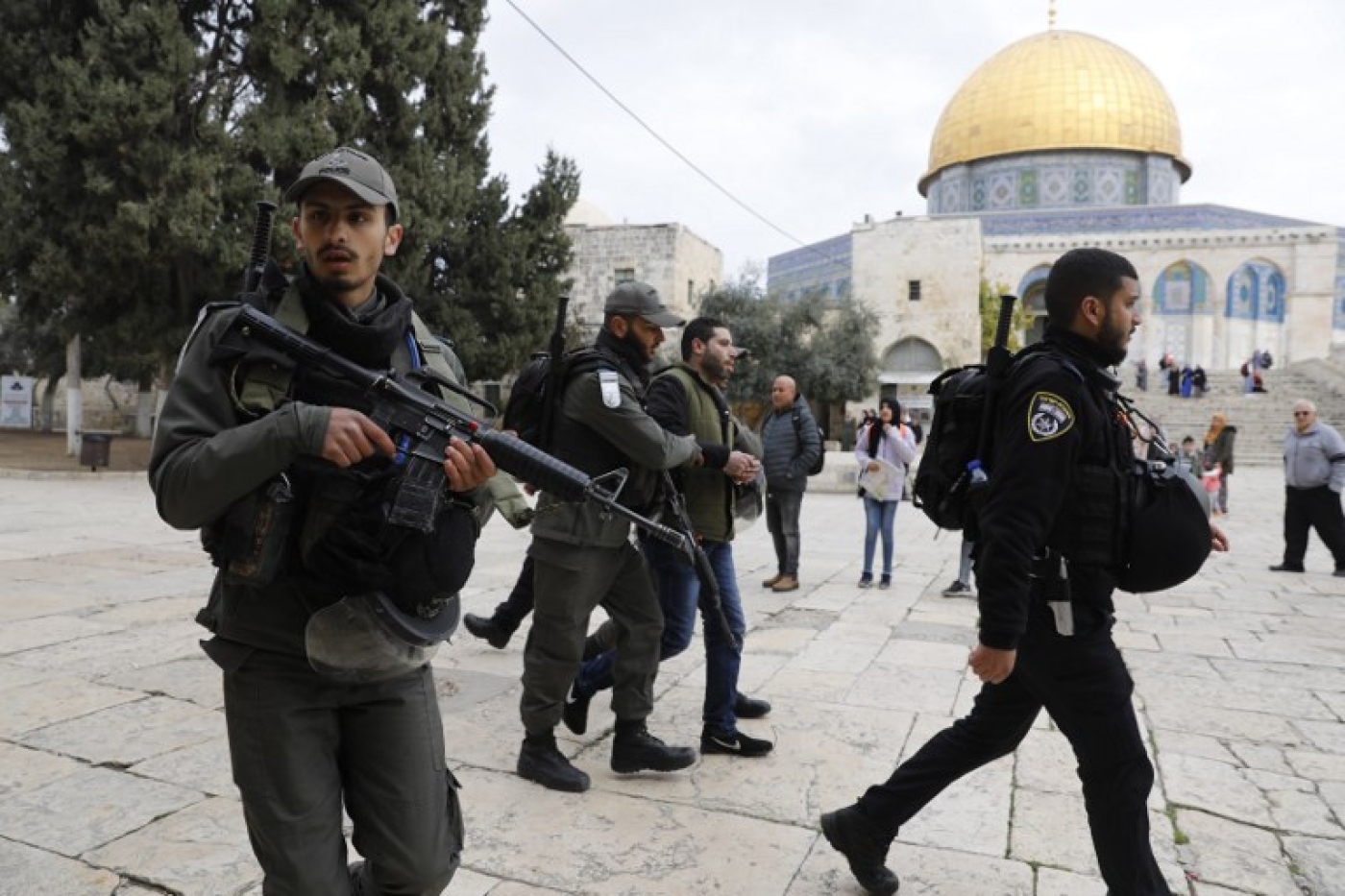 Below the Western media’s radar, tensions have been escalating in Israeli-occupied Jerusalem.

In the last week, a new confrontation has emerged over al-Aqsa Mosque compound, in the context of intensifying efforts by Israeli authorities and settlers to change the status quo and take over Palestinian properties in and around the Old City.

The Jordanian government recently decided to expand the composition of the Waqf – the body charged with managing al-Aqsa Mosque compound – to include a number of high-ranking Palestinians, alongside the long-standing Jordanian members.

The move came in response to what International Crisis Group’s Ofer Zalzberg described to Haaretz as “the erosion of the status quo” at the site, including the tolerance by Israeli occupation forces of “quiet worship” by Jews in the compound – “a relatively new development”, the paper noted.

Last Thursday, the newly expanded council inspected, and prayed at, a building located at the Gate of Mercy (Bab al-Rahma), shuttered by Israeli occupation authorities since 2003. At the time, the closure was justified on the grounds of alleged political activities and links to Hamas – but the building has remained closed ever since.

What is taking place in Jerusalem is 'an organised and systematic campaign of settlers, with the assistance of government agencies, to expel entire communities in East Jerusalem'

Overnight on Sunday, Israeli forces put new locks on metal gates that lead to the building. When Palestinian worshippers attempted to open the gates, clashes broke out, and a number of Palestinians were arrested by Israeli police.

Tuesday night saw renewed confrontations and arrests, while an Israeli court on Wednesday banned a dozen or so Palestinians from entering the compound. Both the Palestine Liberation Organisation and Hamas have condemned the developments, and warned of the “volatility” of the situation.

New facts on the ground

Events in the compound cannot be viewed in isolation from the bigger picture in Jerusalem, and in particular, what Israeli NGO Ir Amim has called an “accelerated, intensifying chain of new facts on the ground”, including “a mounting number of state-sponsored settlement campaigns inside Palestinian neighbourhoods”.

What is taking place in Jerusalem is “an organised and systematic campaign of settlers, with the assistance of government agencies, to expel entire communities in East Jerusalem and to establish settlements in their stead”, in the words of an Israeli settlements’ monitor.

“It is very clear what they want: a Jewish majority here and in East Jerusalem,” Silwan-based activist Jawad Siyam told the Independent recently. His community is blighted by the presence of the settler-run “City of David” compound, which is set to receive a further boost from Israeli occupation authorities in the form of a planned cable-car station.

Jerusalem has largely been out of the headlines for awhile, with most attention – understandably – being paid to the Great March of Return protests in the Gaza Strip and the bogged-down efforts to secure relief from the blockade. Israeli elections are also on the horizon, and speculation continues over what precisely the Trump administration has got in store by way of a “peace plan”.

In the background, however, accelerated Israeli colonial policies in occupied East Jerusalem could be leading to a new boiling point.

The Waqf has stated that it seeks the opening of the Bab al-Rahma site, a demand that has the potential to become a focus for the kinds of mass protests witnessed in the summer of 2017. Then, metal detectors introduced by Israeli occupation authorities outside al-Aqsa Mosque compound sparked spontaneous demonstrations, with the devices ultimately removed.

Whether or not the Waqf chooses such a path, it could also find its hand forced by the pressure of grassroots activism; there is considerable concern among Palestinians that the Israeli government – along with the so-called “Temple movement” activists – are ultimately working towards a spatial division of, and establishment of formalised Jewish prayers within, al-Aqsa Mosque compound. Meanwhile, the United States is proceeding with the closure of its consulate in East Jerusalem, and relocation of Palestinian “affairs” to an office within the new embassy – a potent symbol, were one needed, that the Trump administration’s vision will be a stark departure from even the pretence of a “two-state solution”, and a rubber-stamp for Israel’s de-facto, single state.

This week’s events – however they develop – are a reminder, however, that while Israel and the US see Jerusalem as fair game for an accelerated process of colonisation and deepening imposition of Israeli sovereignty, the city’s Palestinian residents are experienced spoilers of Israeli designs, and may well soon reprise such a role. Religion
The journey to al-Aqsa Mosque