Osama Abuirshaid
If the new US president really wants to re-establish his country's 'moral authority,' he must end US complicity in Israel's subjugation of the Palestinian people In a 2020 Foreign Affairs essay while still seeking to secure nomination as the Democratic presidential candidate, US President Joe Biden wrote about the necessity of leading by example, reestablishing his country's "moral authority," and undoing the harm caused by then-president Donald Trump.

He noted that Trump "has turned away from the democratic values that give strength to our nation and unify us as a people".

That disregard for democratic values was manifested in Trump's inciting of an insurrection last month, which attempted to overturn Biden's election.

As Trump has undermined democracy at home, so too has he enabled other countries to disregard with impunity their obligations under international law, as in the case of Israel. By entrenching Israel's separate-and-unequal rule, he further impaired the possibility of the Palestinian people achieving democracy and freedom.

Adherence to democratic values would seem to call on Biden's administration to reverse the most destructive policies Trump implemented in Palestine, which included moving the US Embassy to Jerusalem and recognising Israel's sovereign claims to the city that Palestinians view as their capital.

US bias in favour of Israel did not start with the Trump administration, nor will it end there

Trump also had the term "occupied territories" removed from the State Department lexicon and deemed Israel's illegal colonisation of the West Bank to be legitimate.

Then there was Trump's "deal of the century," which enables Israel to unilaterally annex 30 percent of the West Bank - shattering Palestinians' right to have a contiguous, sovereign and viable state of their own.

Trump also shut down the Palestine Liberation Organisation mission in Washington; closed the US consulate general in Jerusalem, cutting diplomatic ties with the Palestinian people; defunded US humanitarian aid to UNRWA, which provides social services to Palestinian refugees; and set the stage for a gag order on advocacy for Palestinian rights by equating it with hate speech.

Trump's disastrous US foreign policy further marginalised the Palestinian people, who have always been seen by the US as a sideshow to its relationship with Israel.

US bias in favour of Israel did not start with the Trump administration, nor will it end there. The decades-long relationship between the US and Israel has been marked by virtually unconditional military and diplomatic backing for Israel's denial of self-determination to the Palestinian people.

This has been the situation under successive administrations, Democratic and Republican alike. US rhetoric for decades about the two-state solution has yet to be translated into meaningful action. The US has rarely tried to pressure Israel into abiding by international law and resolutions. The Obama administration, in which Biden served as vice president, was no exception.

In 2016, the US pledged a record-breaking $38bn over a decade to fund weapons to Israel at taxpayer expense. These weapons are used by Israel to commit human rights abuses against Palestinians under military occupation in the West Bank and Gaza Strip on a daily basis.

While on the campaign trail, Biden and his now secretary of state, Antony Blinken, were clear that weapons to Israel would not be conditioned upon its recognition of Palestinian rights and commitment to international resolutions and conventions. Biden reportedly intervened personally in July to keep the word "occupation" out of the Democratic platform, in reference to Palestinian lands occupied by Israel since 1967.

Biden and Vice President Kamala Harris have expressed their unshakeable commitment to supply Israel with weapons to further entrench its military occupation, previously substantiated through their votes in the Senate. This is inconsistent with the assertion that they want to restore US "moral leadership" on the world stage.

There is nothing moral about enabling an occupation that violates human rights and international norms. During Blinken's Senate confirmation hearing, he was asked if he thought Israel was a racist nation. He replied: "No, I do not." He also affirmed that the Biden administration was planning to keep the US Embassy in Jerusalem, in flagrant violation of international law.

These positions are out of step with the Democratic Party, which is becoming increasingly supportive of Palestinian rights, as growing numbers in Congress condemn Israeli violations of international human rights laws. 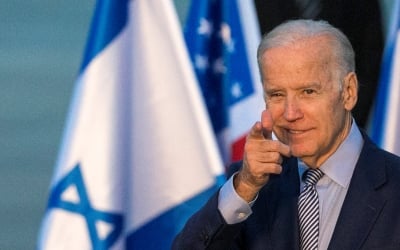 As an example of this newfound assertiveness, last June, 191 Democratic representatives wrote a letter to Israeli Prime Minister Benjamin Netanyahu warning against Israeli annexation, citing it as a move that would hurt Israel's relationship with the US and damage chances for peace.

Democratic Congresswoman Betty McCollum of Minnesota spearheaded legislation - which has been at the committee stage since 2019 - that seeks to end US taxpayer funding behind Israeli human rights violations committed in the incarceration of Palestinian children in military prisons.

The base of the party is similarly supportive of Palestinian rights.

A December 2018 poll found that 56 percent of Democrats supported sanctions against Israel for continuing to colonise Palestinian land. According to a recent Gallup poll, 55 percent of Americans support the establishment of a Palestinian state. Support has increased among both parties, but is much higher among Democrats.

With respect to the construction of illegal settlements in the occupied Palestinian territories, 42 percent of Republicans responded that the US should do nothing, while only eight percent of Democrats agreed, with many saying the US should impose economic sanctions, either through the UN or unilaterally.

The new administration must embody those values in the decisions it makes, which shape millions of lives in Palestine

The Biden administration must reflect the increasing number of Democrats and Americans supportive of Palestinian rights.

For Biden to lead by example on foreign policy, his administration must recognise the rights of the Palestinian people to freedom, justice, equality and self-determination, as outlined in international treaties and laws.

The administration must first reverse the policies of the Trump administration that further ostracised and subjugated Palestinians, and then reorient US policy in the long term, to be guided by principles of human rights and international laws.

Biden, in his essay, referred to the democratic moral code, writing that democracy "is the heart of who we are and how we see the world - and how the world sees us. It allows us to self-correct and keep striving to reach our ideals over time."

Freedom is a democratic right that should be enjoyed by all. Palestinians have long been deprived of that right, partially because of US complicity in Israel's domination over the Palestinian people.

The new administration must embody those values in the decisions it makes, which shape millions of lives in Palestine. To fulfill these ideals, leaders must incorporate their principles into all policy decisions - and be held accountable when they don't. The value of democracy is not selective or conditional, and to lead by example means to recognise that right for all.

Osama Abuirshaid is the executive director of American Muslims for Palestine (AMP), an education and advocacy organisation that promotes justice for Palestine in the US. Abuirshaid lectures on Middle East and American politics, and has appeared on media outlets including CBS Washington, ABC Washington, NPR and various Arabic satellite TV channels such as Al Jazeera. He is the co-author of the study Hamas: Ideological Rigidity and Political Flexibility, which was published by the United States Institute of Peace in 2009 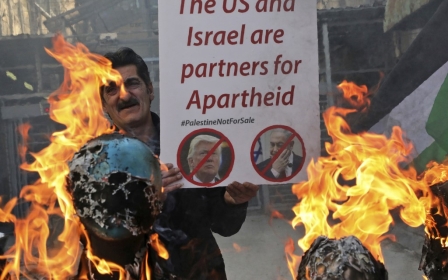